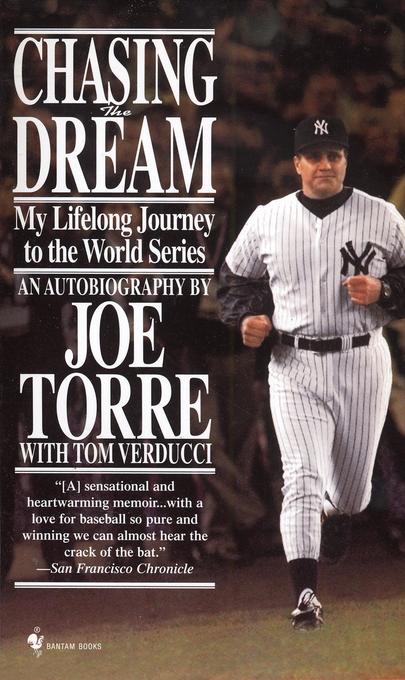 Chasing the Dream: My Lifelong Journey to the World Series

von Joe Torre
Paperback. Sprache: Englisch.
Taschenbuch
"Maybe the good Lord was just waiting for me to put on the pinstripes."

When Joe Torre was fired as manager of the St. Louis Cardinals in 1995, he thought his career in baseball was over. After more than three decades and
4,200 games as a player and ma … weiterlesen

"Maybe the good Lord was just waiting for me to put on the pinstripes."

When Joe Torre was fired as manager of the St. Louis Cardinals in 1995, he thought his career in baseball was over. After more than three decades and
4,200 games as a player and manager, one thing had always eluded him--winning a World Series.

He had all but given up his dream when the New York Yankees made him an offer to manage their 1996 club. Encouraged by his wife and others, he accepted, and so began one of the greatest seasons in the fabled history of the New York Yankee franchise and one of the most inspiring, heartwarming stories in all of
baseball.

Here is the ultimate insider's record of that unforgettable season by the man whose personal struggles captured the hearts and imaginations of fans
everywhere. Tough, gritty, but always fair and honest, Torre vividly reveals how he turned a potentially volatile mix of talented youngsters such as Andy
Pettitte and Derek Jeter, seasoned veterans like Wade Boggs and Paul O'Neill, and so-called "problem" players like Darryl Strawberry and Dwight Gooden into a cohesive unit that cared more about winning than personal egos. He explains how he played his hunches and earned his team's confidence and respect as he
focused his players from spring training on toward one goal: the World Series. And he did it all in a pressure-filled sports city that expects nothing less
than a champion.

But how he did it is only part of this remarkable story. For at the same time that Torre was overcoming the odds on the field, his family was facing much
greater hardships off the field. He speaks candidly and emotionally of the tragedy of his oldest brother Rocco's sudden death, and the agonizing ordeal of
his other older brother, Frank, who waited for the heart transplant that could save his life. It was his wife, Ali, who gave him the faith to believe
anything was possible. Together with his sisters Rae and Sister Marguerite, a nun from Queens, they dared to dream the impossible. In a fairy-tale ending
not even the best Hollywood scriptwriter could imagine, Frank Torre got his new heart the day before the Yankees won their first World Series championship
since 1978--and Joe Torre won his first ever.

Here is Joe Torre's own story--told for the first time in his own words--from his early childhood in Brooklyn, to his celebrated baseball career playing with the likes of Hank Aaron and Bob Gibson, to his stint as the first native New Yorker ever to manage the Yankees. Offering a rare behind-the-scenes look at a season to remember and a man who went through so much to reach the pinnacle of his profession, Chasing the Dream is more than just another sports
story. It is a poignant reminder of why we love the game--and how, sometimes, nice guys do finish first.

Joe Torre played for the Braves, the Cardinals, and the Mets before managing all three teams. From 1996 to 2007, Torre managed the New York Yankees, which he chronicles in his book The Yankee Years, cowritten with Tom Verducci. He was manager for the Los Angeles Dodgers from 2008 to 2010. Additionally, Torre has served as Major League Baseball's chief baseball officer since 2011 and was elected to the National Baseball Hall of Fame in 2014.