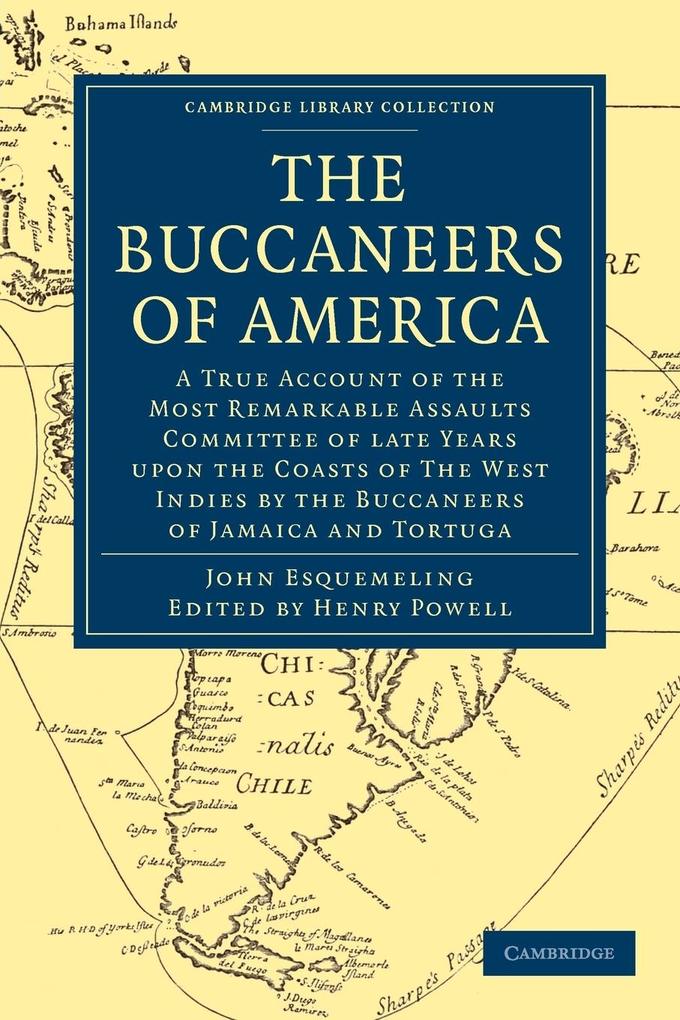 The Buccaneers of America

A detailed description of buccaneer Henry Morgan's exploits in the West Indies, first published in 1684 and reissued in 1893.

Introduction; The translator to the reader; Part I: 1. The author sets forth towards the Western Islands, in the service of the West India Company of France; 2. Description of the Island of Tortuga; 3. Description of the great and famous island of Hispaniola; 4. Of the fruits, trees and animals that are found at Hispaniola; 5. Of all sorts of quadruped animals and birds that are found in this island; 6. Of the origin of the most famous pirates of the coasts of America; 7. After what manner the pirates arm their vessels, and how they regulate their voyages; Part II: 1. Origin of Francis L'Ollonais, and beginning of his robberies; 2. L'Ollonais equips a fleet to land upon the Spanish islands of America, with intent to rob, sac, and burn whatever he met; 3. L'Ollonais makes new preparations to take the city of St. James de Leon; 4. Of the origin and descent of Captain Henry Morgan; 5. Some account of the Island of Cuba; 6. Captain Morgan resolveth to attack and plunder the city of Porto Bello; 7. Captain Morgan taketh the city of Maracaibo, on the coast of New Venezuela; Part III: 1. Captain Morgan goes to the Isle of Hispaniola to equip a new fleet, with intent to pillage again upon the coasts of the West Indies; 2. What happened in the river De la Hacha; 3. Captain Morgan leaves the Island of Hispaniola, and goes to that of St. Catharine, which he takes; 4. Captain Morgan takes the Castle of Chagre, with four hundred men sent for this purpose from the Isle of St. Catharine; 5. Captain Morgan departs from the Castle of Chagre, at the head of one thousand two hundred men, with design to take the city of Panama; 6. Captain Morgan sends several canoes and boats to the South Sea; 7. Of a voyage made by the author, along the coasts of Costa Rica, at his return towards Jamaica; 8. The author departs towards the Cape of Gracias ... Dios; 9. The relation of the shipwreck, which Monsieur Bertram Ogeron, Governor of the Isle of Tortuga, suffered near the Isles of Guadanillas; 10. A relation of what encounters lately happened at the Island of Cayana and Tobago; Part IV: 1. Captain Coxon, Sawkins, Sharp and others set forth in a fleet towards the province of Darien, upon the continent of America; 2. They march towards the town of Santa Maria; 3. They take the town of Santa Maria; 4. The Buccaneers leave the town of Santa Maria, and proceed by sea to take Panama; 5. Shipwreck of Mr. Ringrose; 6. The Buccaneers prosecute their voyage, till they come within sight of Panama; 7. They arrive within sight of Panama; 8. Description of the state and condition of Panama; 9. Captain Sawkins is killed before Puebla Nueva; 10. They depart from the Island of Cayboa to the Island of Gorgona; 11. The Buccaneers depart from the Isle of Gorgona, with design to plunder Arica; 12. Captain Sharp and his company depart from the Isle of Plate, in prosecution of their voyage towards Arica; 13. A continuation of their long and tedious voyage to Arica; 14. The Buccaneers depart from the Port of Hilo, and sail to that of Coquimbo; 15. The Buccaneers depart from Coquimbo for the Isle of Juan Fernandez; 16. The Buccaneers depart from the Isle of Juan Fernandez to that of Iquique; 17. A description of the Bay of Arica; 18. They depart from the Port of Hilo to the Gulf of Nicoya; 19. They depart from the Gulf of Nicoya to Golfo Dulce; 20. They depart from Golfo Dulce, to go and cruise under the Quiinoctial; 21. They take another Spanish ship richly laden under the Equinoctial; 22. They arrive at Paitz, where they are disappointed of their expectations; 23. The Buccaneers arrive at a place incognito, to which they give the name of the Duke of York's Islands; 24. They depart from the English Gulf in quest of the Straits of Magellan; 25. The Buccaneers continue their navigation.