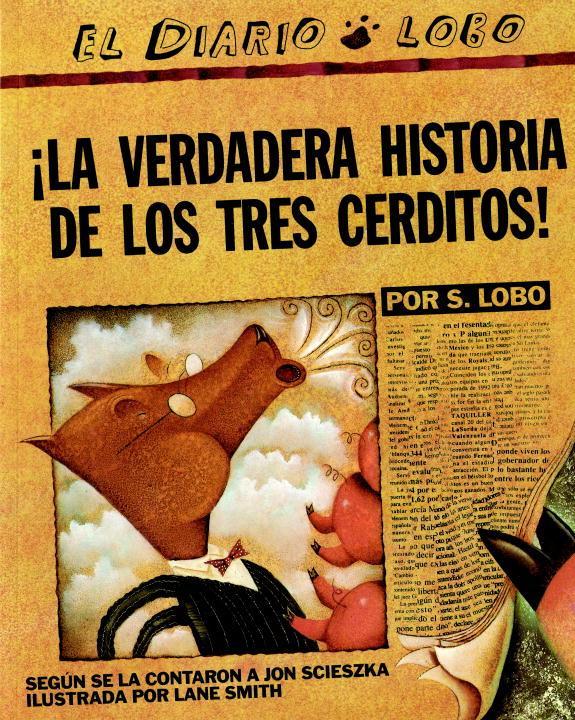 In this Spanish translation of the hysterical and clever fracture fairy tale picture book that twists point of view and perspective, young readers will finally hear th … weiterlesen

You thought you knew the story of the "The Three Little Pigs"… You thought wrong.

In this Spanish translation of the hysterical and clever fracture fairy tale picture book that twists point of view and perspective, young readers will finally hear the other side of the story of "The Three Little Pigs."

"In this humorous story, Alexander T. Wolf tells his own outlandish version of what really happens during his encounter with the three pigs…. Smith's simplistic and wacky illustrations add to the effectiveness of this fractured fairy tale."-Children's Literature

Jon Scieszka (www.jsworldwide.com) grew up in Flint, Michigan, the second oldest and the nicest of six boys. Jon went to school at Culver Military Academy in Indiana where he was a Lieutenant; Albion College in Michigan where he studied to be a doctor; and Columbia University in New York, where he received an M.F.A. in fiction. He taught elementary school in New York for ten years in a variety of positions. He is the author of many books for children including the New York Times Best Illustrated Book The Stinky Cheese Man and Other Fairly Stupid Tales (illustrated by Lane Smith), the Caldecott Honor book The True Story of the Three Little Pigs (illustrated by Lane Smith), and Math Curse (illustrated by Lane Smith). In addition to his work as an author, Jon also runs a web-based literacy program called "Guys Read" that is designed to encourage boys, particularly reluctant readers, to get involved with books. In 2008, Jon was named the country's first National Ambassador for Young People's Literature, a joint effort of the Library of Congress and the Children's Book Council. During his two-year role as Ambassador, he acted as a spokesperson for children's literature, speaking to groups of parents, teachers, and children to encourage the importance of reading.