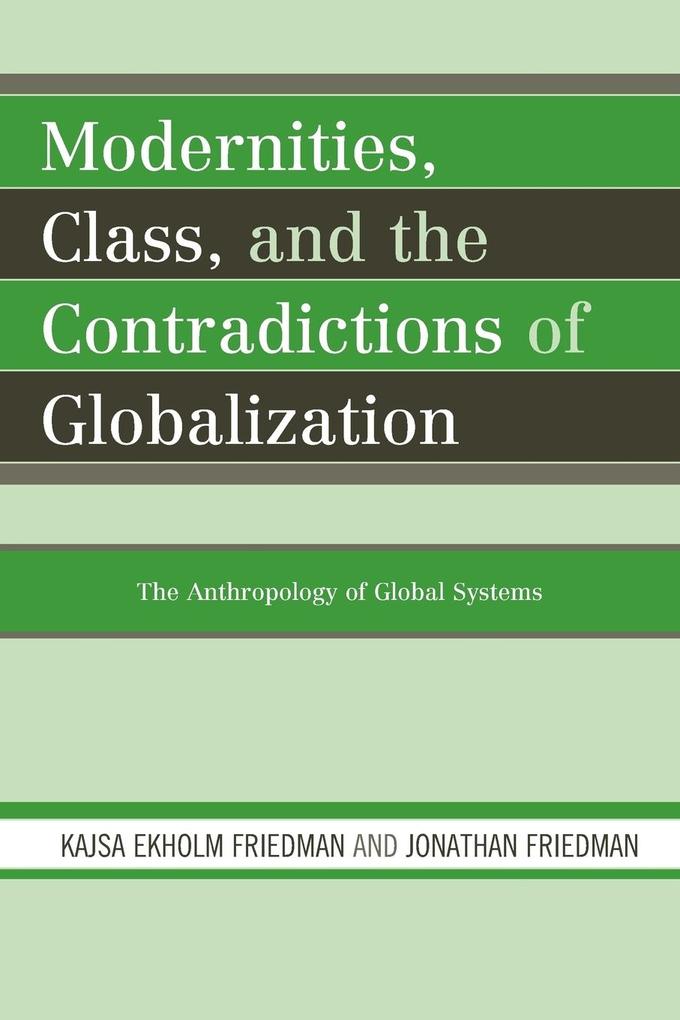 In Modernities, Class, and the Contradictions of Globalization, two distinguished anthropologists look at how global processes have shaped the emergence of our dynamic and often difficult and contradictory modern world. The authors are particularly interested in structures that link individual human beings to more general social transformations. This book is a synthesis of the Friedmans' decades-long anthropological research into the human consequences--whether for good or bad--of globalization.

Introduction
Part I. Other Modernities? Resistance, Continuities, and Transformations
1. From Religion to Magic
2. Myth, History, and Political Identity
3. Will the Real Hawaiian Please Stand? Anthropologists and Natives in the Global Struggle for Identity
4. Global Complexity and the Simplicity of Everyday Life
5. State Classes, the Logic of Rentier Power, and Social Disintegration: Global Parameters and Local Structures of the Decline of the Congo
Part II. Other Modernities? Globalization, the State, and Violence
6. The Struggle against Evil
7. The Implosion of Modernity: A New Tribalism
Part III. Globalization as Representation and Reality
8. The Hybridization of Roots and the Abhorrence of the Bush
9. Indigenous Struggles and the Discreet Charm of the Bourgeoisie

Weaving together a provocative and innovative approach to the global process of social reproduction, Kajsa Ekholm Friedman and Jonathan Friedman move beyond glib and fashionable globalization-speak and identity-talk. In a series of broad-ranging essays, they challenge us to rethink the logic of modernity and issues of political economy, class, cultural authenticity, and representation. -- Nina Glick Schiller, University of Manchester Bacall and Bogart typify a particular time in film. Ekholm Friedman and Friedman define a particular time in anthropology. Bacall and Bogart did it with grace; Ekholm Friedman and Friedman do it with disciplinary elegance. What they do is to rethink anthropology, specifically by using global anthropology to explain the emergence and dynamics of the modern world. In Modernities, Class, and the Contradictions of Globalization, the second volume of their monumental The Anthropology of Global Systems, the authors introduce concepts and theoretical debates that have characterized different attempts to understand the global. Ekholm Friedman and Friedman help us understand the modern world's changing ethnographic landscape, forms of political order, and diverse modes of discourse. They are the Bacall and Bogart of systemic globalization. -- Stephen Reyna, University of Manchester Here, at last, is a book that challenges conventional wisdom in the social sciences concerning globalization. The authors conceive of globalization (and thus the destruction it has sown) as a systemic global process of fragmentation caused by such forces as the decline of Western political economies and the movement of capital into new centers of power. They brilliantly question many public 'solutions' to the problems of globalization, arguing that they are often merely new ways of dressing up old ideas that never did address sufficiently the plight of those caught in the destructive web of globalizing forces. This volume is a major work that will dispel complacency, inspire discussion, and, one hopes, lead to a re-imagining of new solutions to global problems. -- Bruce Kapferer, University of Bergen