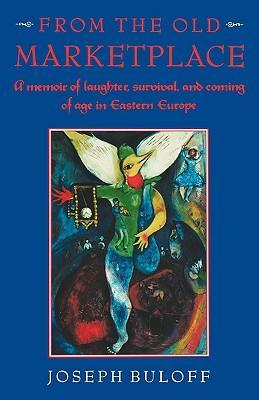 From the Old Marketplace

von Joseph Buloff
Revised. Sprache: Englisch.
Taschenbuch
Documentation of a period which saw Europe and the Western world altered for ever. In the streets of Vilnius, just before and during the First World War, actor Joseph Buloff grew up, learning the arts essential for survival under successive occupatio … weiterlesen
Geschenk per Mail versenden
Taschenbuch

Documentation of a period which saw Europe and the Western world altered for ever. In the streets of Vilnius, just before and during the First World War, actor Joseph Buloff grew up, learning the arts essential for survival under successive occupations by Cossacks, Germans, Bolsheviks and Poles.

Buloff creates a Chagallesque vision of Vilnius by blending hyperbole, sarcasm and sweetness...What is most charming about this tale is the way it blends the coming of age and the coming of history...Buloff summons a vanished epoch. -- Richard Lourie New York Times Book Review We read the lectures [Calvino] was to have given at Harvard--light, graceful, self-mocking prophecies and promises made on literature's behalf--as fragile last words...[There is] a special kind of enchantment once we realize what Calvino is doing...[His] gift is not for seeing two sides to a question, but for seeing how a question conceals other, endlessly shifting and multiplying questions, and even some unlikely answers; for seeing how a word can drift among a family of meanings...Calvino's larger arguments are casual, but his insights are not. Or to put it another way, Calvino's topics are less important than what they permit. They permit, for example, a beautifully paced account of his own reading, a record of cherished books and images, which amounts to a discreet fragment of autobiography. -- Michael Wood New Republic [Buloff's] gift...of evoking multiple levels of reality--comic and tragic, absurd and mundane, sophisticated and innocent, subjective and objective, high and low, actual and fantastic--endows his memoir with the universal qualities of great literature and transforms it into a work of art...Buloff has succeeded in capturing the authentic inner voice that speaks within each of us, the voice that is ageless. -- Tova Reich Washington Post Book World For all its forays into the fantastic realm of childhood fancies and the fearful arenas of pogroms, upheaval, and war, [this book] remains a tightly written narrative...as compelling and dramatic as a traveler's tale told on a winter's night. -- Merle Rubin Christian Science Monitor Breadlines and cigarette shortages; anti-Semitism and ethnic animosity; shifting alliances and power struggles; pogrom, war, occupation, pestilence, revolution--all the disasters that in the first two decades of this century befell Vilnius, the old capital of Lithuania, tumble through the pages of Buloff's novel. In the Central/East European absurdist tradition (Mrozek, Gombrowicz, Olesha, Pil'niak, Grass) that jumbles unbearable reality into a phantasmagoric kaleidoscope, narrator Yosik relates the chaotic history of his spiritual home, Vilnius's old marketplace, and his own quirky Bildungsroman as an undersized Jewish boy with a glib tongue and vivid imagination. Wrenchingly funny and historically faithful, the book...has all the gallant vitality of the vanished life of the marketplace. Library Journal