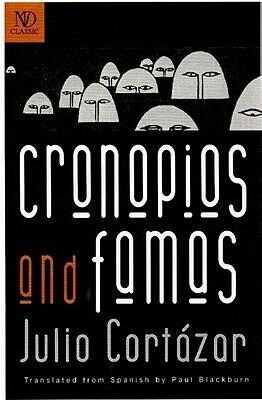 "The Instruction Manual," the first chapter, is an absurd assortment of tasks and items dissected in an instruction-manual format. "Unusual Occupations," the second chapter, describes the obsessions and predilections of the narrator's family, including the lodging of a tiger-just one tiger- "for the sole purpose of seeing the mechanism at work in all its complexity." Finally, the "Cronopios and Famas" section delightfully characterizes, in the words of Carlos Fuentes, "those enemies of pomposity, academic rigor mortis and cardboard celebrity-a band of literary Marx Brothers." As the Saturday Review remarked: "Each page of Cronopios and Famas sparkles with vivid satire that goes to the heart of human character and, in the best pieces, to the essence of the human condition."

Julio Cortázar (1914-1984), Argentine novelist, poet, essayist, and short-story writer, was born in Brussels, and moved permanently to France in 1951. Cortazar is now recognized as one of the century's major experimental writers, reflecting the influence of French surrealism, psychoanalysis, and his love of both photography and jazz, along with his strong commitment to revolutionary Latin American politics.

Taschenbuch
The Tattered Cloak: And Other Stories
von Nina Berberova, …