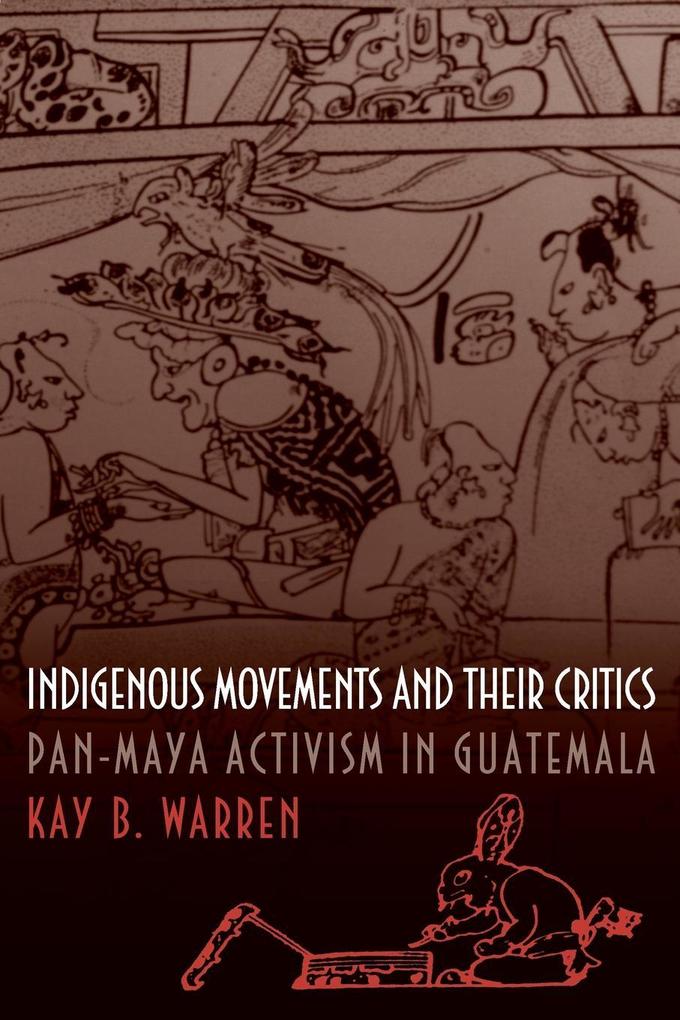 Indigenous Movements and Their Critics

14% Rabatt sichern mit Gutscheincode: LIEBE14
​
In this first book-length treatment of Maya intellectuals in national and community affairs in Guatemala, Kay Warren presents an ethnographic account of Pan-Maya cultural activism through the voices, writings, and actions of its participants. Challen … weiterlesen
Geschenk per Mail versenden
Taschenbuch

Titel: Indigenous Movements and Their Critics
Autor/en: Kay B. Warren

In this first book-length treatment of Maya intellectuals in national and community affairs in Guatemala, Kay Warren presents an ethnographic account of Pan-Maya cultural activism through the voices, writings, and actions of its participants. Challenging the belief that indigenous movements emerge as isolated, politically unified fronts, she shows that Pan-Mayanism reflects diverse local, national, and international influences. She explores the movement's attempts to interweave these varied strands into political programs to promote human and cultural rights for Guatemala's indigenous majority and also examines the movement's many domestic and foreign critics.

The book focuses on the years of Guatemala's peace process (1987--1996). After the previous ten years of national war and state repression, the Maya movement reemerged into public view to press for institutional reform in the schools and courts and for the officialization of a "multicultural, ethnically plural, and multilingual" national culture. In particular, Warren examines a group of well-known Mayanist antiracism activists--among them, Demetrio Cojt!, Mart!n Chacach, Enrique Sam Colop, Victor Montejo, members of Oxlajuuj Keej Maya' Ajtz'iib', and grassroots intellectuals in the community of San Andr s--to show what is at stake for them personally and how they have worked to promote the revitalization of Maya language and culture. Pan-Mayanism's critics question its tactics, see it as threatening their own achievements, or even as dangerously polarizing national society. This book highlights the crucial role that Mayanist intellectuals have come to play in charting paths to multicultural democracy in Guatemala and in creating a new parallel middle class.

<TR>Preface<TR>Acknowledgments<TR>Transcription of Maya Languages and Personal Names<TR>Introduction: Democracy, Marginality, and Ethnic Resurgence3<TR>1Pan-Mayanism and Its Critics on Left and Right33<TR>2Coalitions and the Peace Process52<TR>3In Dialogue: Maya Skeptics and One Anthropologist69<TR>4Civil War: Enemies Without and Within86<TR>5Narrating Survival through Eyewitness Testimony113<TR>6Interrogating Official History132<TR>7Finding Oneself in a Sixteenth-century Chronicle of Conquest148<TR>8"Each Mind Is a World": Person, Authority, and Community163<TR>9Indigenous Activism across Generations177<TR>Conclusions: Tracing the "Invisible Thread of Ethnicity"194<TR>App. 1Summary of the Accord on Identity and the Rights of Indigenous Peoples211<TR>App. 2Questions from the 1989 Maya Workshop Directed to Foreign Linguists215<TR>Glossary: Acronyms, Organizations, and Cultural Terms217<TR>Notes221<TR>Bibliography251<TR>Index281

Starting with an analysis of activism in one Mayan community, a Harvard anthropologist examines the role of indigenous intellectual and their influence in pormoting the rights of Guatemala's indigenous majority on local, national, and international levels.