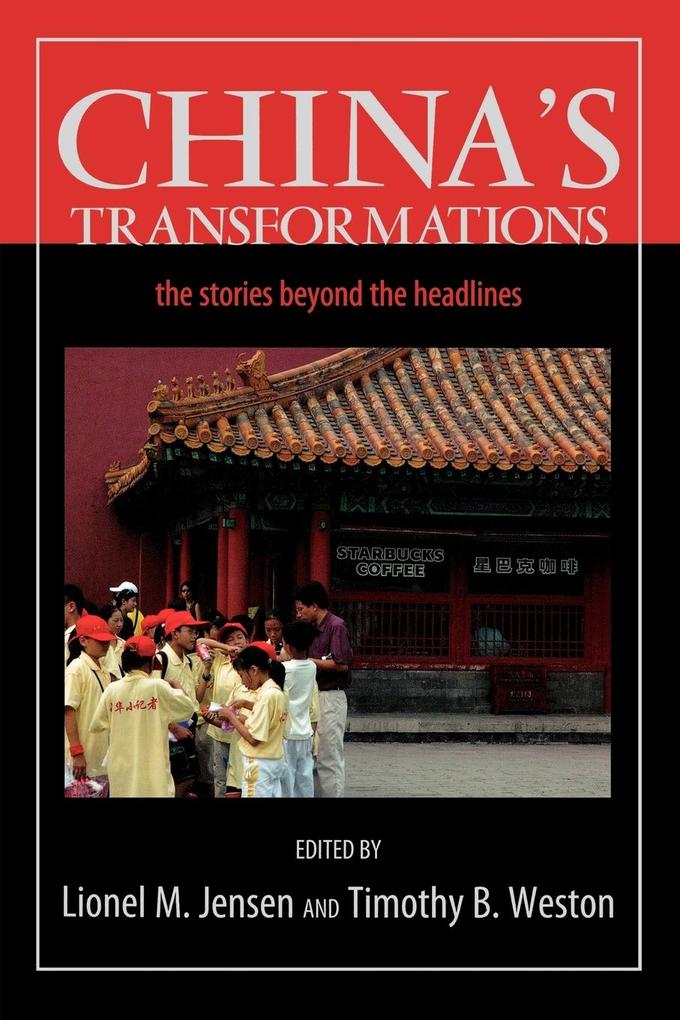 von Lionel M. Jensen
The Stories Beyond the Headlines. Paperback. Sprache: Englisch.
Taschenbuch
This successor volume to China beyond the Headlines takes the reader even farther beyond the "front stage" to explore a China few Westerners have seen. Seeking to bridge the gap between what specialists understand and the general public believes, the … weiterlesen
Dieser Artikel ist auch verfügbar als:
Geschenk per Mail versenden
Taschenbuch

The Stories Beyond the Headlines.
Paperback.
Sprache: Englisch.

This successor volume to China beyond the Headlines takes the reader even farther beyond the "front stage" to explore a China few Westerners have seen. Seeking to bridge the gap between what specialists understand and the general public believes, the contributors challenge readers to move past the usual images of China presented by the media and to think about shared problems. In an entirely new set of essays, they explore such critical issues as environmental degradation, nationalism, unemployment, film and literature, news reporting, the Internet, sex tourism, and the costs of the economic boom to vividly portray the complexity of life in contemporary China and how surprisingly often it speaks to the American experience.

Clear, readable, and compelling-an excellent collection of essays that I will certainly use myself. -- Rana Mitter, University of Oxford A re-engagement with the editors' China beyond the Headlines (2000), with new insights and contributing authors, this compelling work is at once a critical assessment of contemporary Sino-U.S. relations and an appraisal of myriad social, political, and economic shifts within the PRC. Esteemed scholars, journalists, and activists engage in topics as diverse as the environment, eating habits, the Internet, film and literature, coal mining, Falun gong, and journalism... The book is highly accessible: all authors use a narrative writing style; a brief chronology and note on Chinese pronunciation preface the work; and each chapter includes a short list of recommended readings. This volume and its 2000 precursor address the editors' desire to contextualize China in an era when the U.S. is increasingly less distinct from the once exotic and mythologized 'middle kingdom.' Essential. CHOICE The authors in this book provide the detailed information needed to understand the relationship of the Chinese regime with its citizens, making it essential reading for a general audience... The authors are a group of prominent scholars and practitioners cutting across standard social science and humanities boundaries... Each chapter is distinguished by a thorough understanding of its subject and...each goes beyond a mere descriptive account, placing the analysis in a political, historical, cultural, social and/or economic context... It would make an excellent textbook and should provoke exciting classroom discussions. -- Stanley Rosen The China Journal, January 2009, No 61 The major contribution of the book is that it addresses the basic yet most critical issues in contemporary China in a comprehensive way. It provides a fresh and timely look at a changing China. Students and scholars of contemporary China will certainly benefit from reading the book. Journal of Chinese Political Science, July, 2009 China's Transformations succeeds in providing an array of chapters on interesting topics that draw the reader in and stimulate thinking about both China and the ongoing dialogue between American and Chinese society. Having used this book twice in my undergraduate class on Chinese politics, I can report that students-even those who have little natural interest in China-enjoy reading it and gain a great deal from it. Yet even while China's Transformations is well-suited for use in the undergraduate classroom, China specialists and members of the general public alike will also find the chapters engaging and thought-provoking... A rare find: an edited volume on China that is fun to read, accessible to a variety of audiences, and full of highly insightful and interesting analyses. Pacific Affairs, March 2010 I intend to adopt this terrific book. It's the perfect blend of accessible prose and rigorous scholarship on important but seldom-covered topics. -- Karl Gerth, University of South Carolina Lionel Jensen and Timothy Weston's book captures the headlines with an analysis that goes far beyond the headlines... Students and scholars of contemporary China will certainly benefit from reading this work. Journal of Chinese Political Science, November 2009