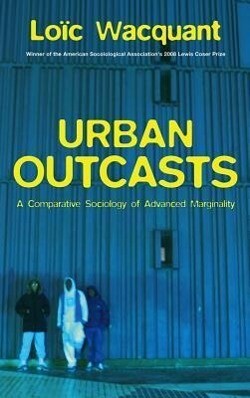 von Loic Wacquant
A Comparative Sociology of Advanced Marginality. black & white illustrations. Sprache: Englisch.
Taschenbuch
In this new book, Loc Wacquant reveals that urban marginality is not everywhere the same, as the reader is taken inside the dilapidated black ghetto of inner Chicago and the deindustrializing banlieue of outer Paris.

In this new book, Loc Wacquant reveals that urban marginality is not everywhere the same, as the reader is taken inside the dilapidated black ghetto of inner Chicago and the deindustrializing banlieue of outer Paris.

Ghetto, Banlieue, Favela et Caetera: Tools for Rethinking Urban Marginality. PROLOGUE: AN OLD PROBLEM IN A NEW WORLD?. 1. The Return of the Repressed: Riots, 'Race,' and Dualization in Three Advanced Societies. I. FROM COMMUNAL GHETTO TO HYPERGHETTO. 2. The State and Fate of the Dark Ghetto at Century's Close. 3. The Cost of Racial and Class Exclusion in 'Bronzeville'. 4. West Side Story: A High-Insecurity Ward in Chicago. II. BLACK BELT, RED BELT. 5. From Conflation to Comparison: How Banlieues and Ghetto Converge and Contrast. 6. Stigma and Division: From the Core of Chicago to the Margins of Paris. 7. Dangerous Places: Violence, Isolation, and the State. III.- LOOKING AHEAD: URBAN MARGINALITY IN THE 21st CENTURY. 8. The Rise of Advanced Marginality: Specifications and Implications. 9. Logics of Urban Polarization from Below. Postcript: Theory, History, and Politics in Urban Analysis

Loic Wacquant is Professor of Sociology at the University of California-Berkeley and Researcher at the Centre de sociologie europeenne-Paris.

"This is a fantastic book that anyone interested in the historical trajectory of advanced capitalism and the marginality it breeds should read. The book's real strength is its fusion of political sociological theory, economic history and a rich, everyday ethnography ... Wacquant's political sociological method is the perfect complement to recent urban geographical scholarship that deconstructs the spatial political economy of 'neoliberal urbanism', opening up the impacts of these policies on the ground with surgical precision." Area "This book should be mandatory reading for scholars, graduate students and advanced undergraduates interested in this subject ... this is an exciting book written by one of the most prominent urban sociologists today. It provides a useful concept for understanding urban poverty (i.e. advanced marginality), outlines a powerful argument for how advanced marginality varies in different countries and, most importantly, identifies the power of states to shape the structure of these places and the life-chances of their residents." Urban Studies "A thoroughly researched manifesto for an urban sociology that empowers the new precarious labour force of the post-industrial city." Race and Class "[Wacquant] raises a series of valuable discussion points on methodology, scales of explanation, the value and challenges of comparative study, modes of writing, and the question of the author's positionality and its effects on the drama he is recounting - a rich harvest to garner from a single volume ... would make first-rate reading and discussion material for senior undergraduate and graduate seminars." Annals of the Association of American Geographers "Urban Outcasts is a majestic synthesis of research on urban marginality in advanced capitalist countries. It uncovers the common forces leading to a new kind of poverty on both sides of the Atlantic while forcefully demonstrating the distinctly different ways social exclusion operates in Europe and in America. This refreshingly new look at the nexus of race, class and space in the post-Fordist world is a major contribution to social theory and urban studies." Ivan Szelenyi, author of Cities After Socialism and Patterns of Exclusion "In this impressive book, Wacquant deploys his unparalleled knowledge of the black American ghetto and the French banlieue to tackle a series of foundational questions about inequality and poverty. He shows us the variable ways in which these two conditions get constituted in two strands of capitalism and how 'territorial stigmatization' affects both the strategies of the poor and the public policies aimed at their reserved zones. The result is a provocative analysis of polarization from below and of the lived realities of urban marginality." Saskia Sassen, author of The Global City and Territory, Authority, Rights