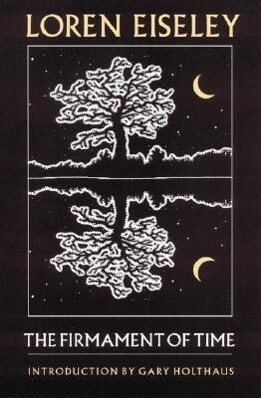 The Firmament of Time

Loren Eiseley examines what we as a species have become in the late twentieth century. His illuminating and accessible discussion is a characteristically skillful and compelling synthesis of hard scientific theory, factual evidence, personal anecdotes, haunting reflection, and poetic prose.

Loren Eiseley (1907-1977), naturalist, essayist, philosopher, and poet, won the John Burroughs Medal for best publication in the field of nature writing in 1961 for "The Firmament of Time." Introducer Gary Holthaus, a freelance poet and writer, is the author of "Wide Skies: Finding a Home in the West."

"There can be no question that Loren Eiseley maintains a place of eminence among nature writers. His extended explorations of human life and mind, set against the backdrop of our own and other universes are like those to be found in every book of nature writing currently available. . . . We now routinely expect our nature writers to leap across the chasm between science, natural history, and poetry with grace and ease. Eiseley made the leap at a time when science was science, and literature was, well, literature. . . . His writing delivered science to nonscientists in the lyrical language of earthly metaphor, irony, simile, and narrative, all paced like a good mystery."--"Bloomsbury Review"