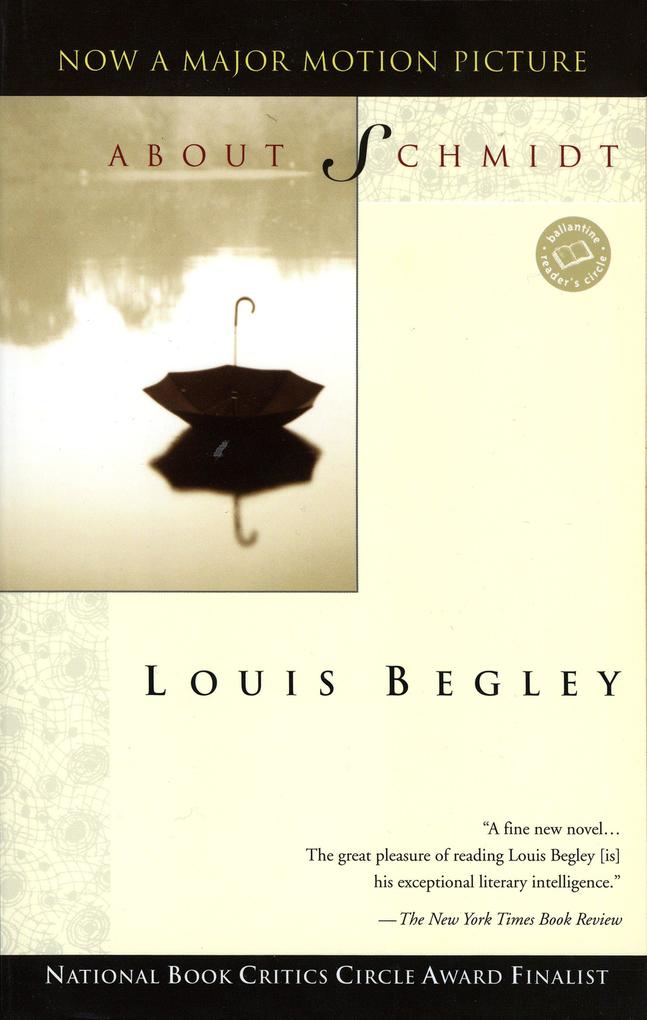 "Begley again demonstrates that he can reveal the complexities of society and personality with a clear eye and graceful style... Morethan meets the requirements of graceful fiction."
Time

Proud, traditional, and impeccably organized, Albert Schmidt is a button-down lawyer of the old school. But now, after years of carefulmanagement, his life is slowly unraveling. His beloved wife has recently died. He stumbles--or is he being pushed?--into earlyretirement. And his daughter, his only child, is planning to marry a man Schmidt cannot approve of, for reasons he can scarcely admit, even to himself. As Schmidt gropes for resolutions, he finds unexpected hope in an intense passion that comes out of the blue.

Set in the Hamptons and Manhattan, infused with black humor and startling eroticism, About Schmidt is both a meditation on lonelinessand on the power of romance to unlock the most impenetrable recesses of the heart.

"Comical, tough, unsparing; it is as if Louis Auchincloss had exchanged the kid gloves for brass knuckles... Interesting and nervy."
The Washington Post Book World

"A powerful story of a man's fall from grace... The Remains of the Day come[s] to mind."
Publishers Weekly (starred review)

Louis Begley is the author of four novels. Wartime Lies, which was written when he was in his mid-fifties, was followed by The Man Who Was Late, As Max Saw It, and About Schmidt. He is currently finishing a fifth novel. Begley has another life, that of a lawyer. He is a senior partner at Debevoise & Plimpton, one of America's most prestigious firms, and is the head of its international practice.

Wartime Lies was the winner of the PEN Hemingway Award, The Irish Times Aer Lingus International Prize, and the Prix Medicis Etranger, France's most coveted prize for fiction in translation. It was a National Book Award, Los Angeles Times Book Award, and National Book Critics' Circle Award finalist. About Schmidt was likewise a National Book Critics' Circle Award and Los Angeles Times Book Award finalist. Begley has received the American Academy of Letters prize for literature and numerous other awards.

Begley was born in Stryj, a town that was Polish and is now part of Ukraine, in 1933. Being Jewish, he survived the German occupation by pretending, with the help of false identification papers, to be a Catholic Pole.

Begley and his parents left Poland in 1946 and settled in New York in 1947. Begley graduated from Harvard College in 1954, and after having served in the U.S. army, from Harvard Law School in 1959.

Since 1974, Begley has been married to Anka Muhlstein, a prize-winning French author of biographies and other historical works. The combined family includes five grown children. His are a painter and sculptor, a book critic, and an art historian. Hers are a foreign relations specialist and a television journalist.

Taschenbuch
Can't Wait to Get to Heaven
von Fannie Flagg