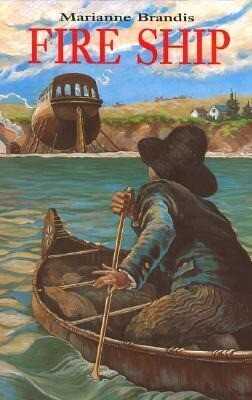 von Marianne Brandis
Empfohlen von 14 bis 18 Jahren. New. Sprache: Englisch.
Taschenbuch
Thirteen-year-old Dan Dobson and his family have just immigrated to Upper Canada from the American States when the War of 1812 flares up. Their neighbours in the town of York - today's Toronto - suspect them of spying for the Americans, but the Dobso … weiterlesen
Geschenk per Mail versenden
Taschenbuch

Thirteen-year-old Dan Dobson and his family have just immigrated to Upper Canada from the American States when the War of 1812 flares up. Their neighbours in the town of York - today's Toronto - suspect them of spying for the Americans, but the Dobsons "are" loyal to Britain and determined to remain in York. Dan's dream is to sail with the British frigate "Sir Isaac Brock" which he and his father are helping to build. He sees war as an exciting adventure - that is until he gets his first taste of battle on the day the American forces invade York. "Fire Ship" is a fast-moving historical novel for young people that brings the War of 1812 to life in a way that only Marianne Brandis can. The attention to detail and acute historical sensibility that so distinguished Brandis's Emma' trilogy are in full evidence once again. From the opening scene of "Fire Ship" in which Dan paddles across the silent bay towards Toronto Island to the graphic scenes of cannon fire and rough military doctoring in Fort York, Brandis invites us to experience Toronto exactly as it was in 1813. She also introduces us to a strong new character in Dan who grapples with issues of loyalty and nationality and the brutality of war. The story must work as a story; it must not be a sugar-coated history lesson, ' Brandis says of her approach to historical fiction, my goal is to give fiction the verisimilitude of fact, and to touch fact with the colour and vivacity of fiction.'

Marianne Brandis was born in the Netherlands in 1938 and came to Canada in 1947. She has lived in British Columbia, Nova Scotia, and Ontario, and has worked as a writer for radio as well as teaching English at Ryerson Polytechnical University in Toronto. Her work was first published in the 1960s and she has been a full-time writer since 1989. She now lives in Stratford, Ontario.

'Marianne Brandis provides evidence of her usual meticulous research in re-creating the lives of ordinary people caught up in extraordinary historical events. There is plenty of substantiating detail about houses, food, clothing, uniforms, the battle itself, and daily activities. Fire Ship is a worthy addition to the growing number of books for young readers about the War of 1812. Especially subtly done is Brandis' linking of the cries of the recurring loon to the course of action, the association of the great ship and natural phenomena, and the suggestion of the war in microcosm in the tribulations of Dan's youngest brother, George, at the hands of the Fitzgeralds.' Canadian Children's Literature