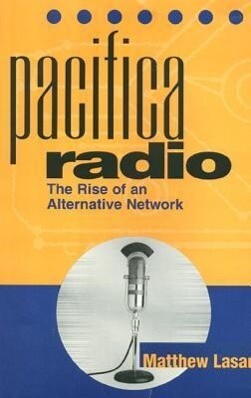 von Matthew Lasar
The Rise of an Alternative Network. 2 Rev ed. 10 b&w photographs. Sprache: Englisch.
Taschenbuch
In the public radio landscape, the Pacifica stations stand out as innovators of diverse and controversial broadcasting. Pacifica's fifty years of struggle against social and political conformity began with a group of young men and women who hoped to … weiterlesen
Geschenk per Mail versenden
Taschenbuch

In the public radio landscape, the Pacifica stations stand out as innovators of diverse and controversial broadcasting. Pacifica's fifty years of struggle against social and political conformity began with a group of young men and women who hoped to change the world with a credo of non-violence. Pacifica Radio traces the cultural and political currents that shaped the first listener-supported radio station, KPFA FM in Berkeley, and accompanied Pacifica's gradual expansion into a 5 station network.In this expanded paperback edition, Lasar provides a postscript ("A Crisis of Containment") that examines the external pressures and organizational problems within the Pacifica Foundation that led, in early 1999, to the police shutdown of network station KPFA. Lasar, an admittedly pro-KPFA partisan in the conflict, gives a first-person account, calling it "the worst crisis in the history of community radio".Yet Pacifica Radio is about more than just the network's recent troubles. It is the story of visionary Lewis Hill and the small band of pacifists who in 1946, set out to build institutions that would promote dialogue between individuals and nations. KPFA took to the air in 1949 with stunningly unconventional programs that challenged the dreary cultural consensus of the Cold War. No one in the Bay Area, or anywhere else, had heard anything like it on the airwaves.The first edition of Pacifica Radio, which made the San Francisco Chronicle's non-fiction bestseller list, was praised as "fascinating reading" by In These Times. "Lasar has an eye for paradox, irony and contradiction", wrote the Santa Rose Press Democrat, "but he is first and foremost an able and astute historian".

Series Foreword Preface to Updated Edition (Paperback) Preface to the First Edition Part I: War 1. The Road to Coleville 2. The Pleasures of the Harbor Part II: Dialogue 3. Utopia in Richmond 4. The 2 Percent Solution 5. 1949 6. A Hedonist's Millennium 7. Three Gurus and a Critic Part III: Dissent 8. Palace Revolution 9. Room for Dissent 10. The Man at the Door Conclusion Postscript Notes Index

"Far more than a study of one unusual radio station and its sometimes eccentric cast of characters, this book offers fresh insights on a host of issues essential to understanding modern American culture, from the shift in radicalism toward individualism during the McCarthy era to the rise of the counterculture, and the economics of radio broadcasting. It is enlightening and entertaining and makes a real contribution to the history of postwar America." --Eric Foner, author of The Story of American Freedom "Pacifica Radio: The Rise of an Alternative Network is indispensable reading for anyone who wants to understand what's happening now at KPFA and for all those who would like to know the perils that confront activists who create counter-cultural institutions. ... Lasar has an eye for paradox, irony, and contradiction, but he is first and foremost an able and astute historian, not a satirical novelist, and he does a lot more than air KPFA's dirty laundry. He shows how much the philosophy of the station was shaped in part by the political atmosphere of the Cold War and McCarthyism, though KPFA was opposed to McCarthyism and the Cold War. Pacifica Radio describes all the cultural, political and economic barriers that KPFA had to surmount to get on, and then stay on, the air." --Jonah Raskin, Santa Rose Press Democrat

Taschenbuch
Why I Burned My Book
von Paul K. Longmore