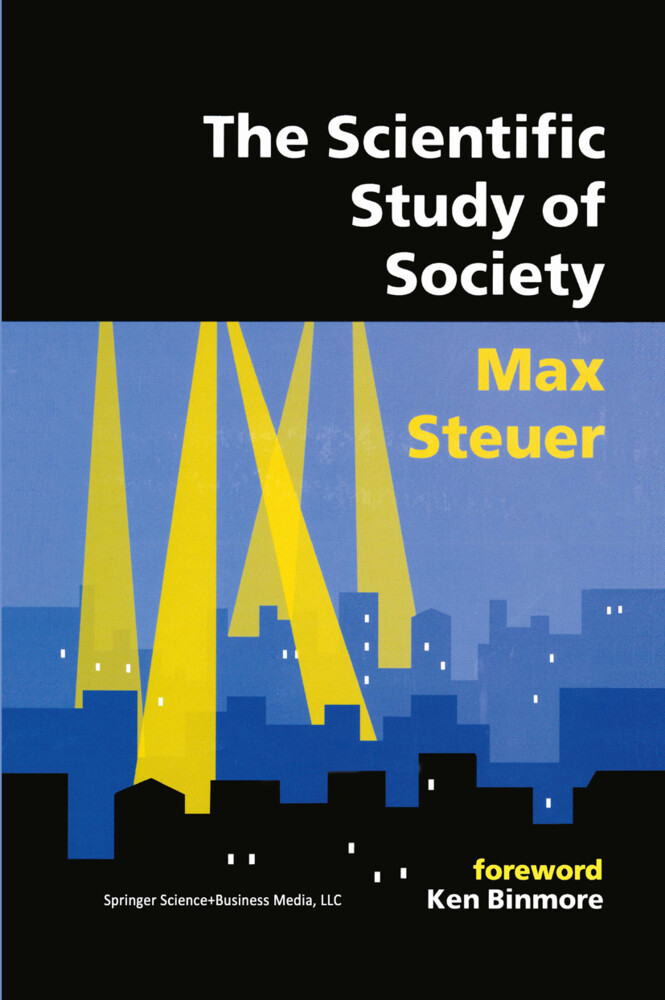 The Scientific Study of Society

Tradition recognises five social sciences: anthropology, economies, social psychology, sociology, and political science. But who knows what is going on in all five disciplines? Social scientists from one discipline often know little or nothing about the progress made by social scientists from another discipline working on essentially the same social problem. Sometimes, even of a neighbouring discipline is terra incognita. the methodology The problem becomes worse when we widen the remit to natural scientists and engineers. I have found little evidence myself that they see themselves as standing on the other side of an unbridgeable golf between two cultures. They observe the intellectual excesses of those few 'newage' social scientists who see themselves fighting a 'science war', but the ignorance of these innumerate critics is so apparent in their grossly naive attacks on natural science, that they are not taken seriously. However, although natural scientists appreciate that most social science is genuine science, they seldom know much about how and why it is done as it iso This can lead to serious inefficiencies in areas in which the traditional frontiers between social and natural science are melting away. An example is the frontier between the economies of imperfeet competition and evolutionary biology. Reversing the usual bias, the evolutionary biologists commonly know little mathematics, and hence find the game theory literature hard to read, with the result that they often spend their time re-inventing the wheel.

From the reviews:
"This great book by Max Steuer uniquely approaches a variety of important questions, including crime, housing, money, migration, religion and the family, from the viewpoint of all the five major social sciences. It is dense with fascinating facts and viewpoints. It is a must read for every practitioner and user of social science, as it is a much needed counterweight to the overspecialization of almost all social science." (George A. Akerlof, Goldman Professor of Economics, University of California, Berkeley - 2001 Nobel Prize in Economics)"Steuer describes, defends, and celebrates the social sciences in this provocative book. He talks straight, expresses himself clearly, and captures the aspirations of all of us who `do' social science." (Kenneth A. Shepsle, George Markham Professor of Government, Harvard University; Founding member, Center for Basic Research in the Social Sciences)"With remarkable succinctness Steuer clarifies for both insiders and outsiders the domains of the five main social sciences by describing their current contributions to our understanding of a half-dozen core concepts (crime, family, housing, migration, money, and religion). Steuer dares to ask tough questions. Even more daringly, he gives some tough answers." (William J. McGuire, Professor of Psychology, Yale University)"One of the consequences of Max Steuer's brilliant idea to compare the study of particular topics across the social sciences is to reveal differing academic and scientific standards. The book is a challenge to sceptics who either deny the existence of social science, or bend the term to cover unscientific speculation. Steuer's landmark book will be required reading for those who wish to debate these issues." (Peter Abell, Eric Sosnow Professor of Management, London School of Economics; Director, LSE Interdisciplinary Institute of Management)"Knowing what the social sciences are, and what they are not, is problematic these days because of the arrival of a variety of impostors that have sprung up in departments of literature and media studies, as well as within the social sciences themselves. Rather than enter into a rhetorical debate about the validity of these competing intellectual enterprises, Max Steuer has adopted an approach that is refreshingly empirical and common-sensical. Anyone who wants to know what social scientists do and why it is interesting and important should read this book." (Douglas Gale, Professor and Chair, Dept. of Economics, New York University)
"Max Steuer's readable book offers both an introduction to contemporary work in social science and also a defense of some general view about the nature of this kind of inquiry. ... Practical social scientists will likely warm up to its instinctive sympathy for their work. ... The hard work, ingenuity and sheer intellect that went into many of these studies is indeed impressive, and well demonstrated by such extended illustration. ... Steuer's book will mark an important beginning." (Anna Alexandrova and Robert Northcott, Economics & Philosophy, Vol. 20, 2004)