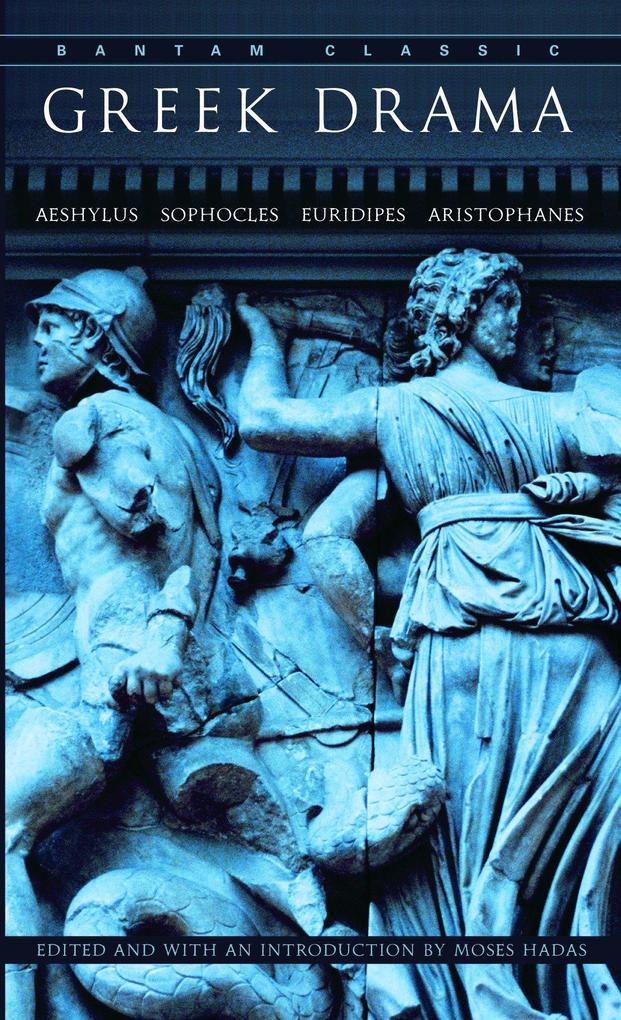 In power, passion, and the brilliant display of moral conflict, the drama of ancient Greece remains unsurpassed. For this volume, Professor Hadas chose nine plays which display the diversity and grandeur of tragedy, and the critical and satiric genius of comedy, in outstanding translations of the past and present. His introduction explores the religious origins, modes of productions, structure, and conventions of the Greek theater, individual prefaces illuminate each play and clarify the author's place in the continuity of Greek drama.

AESCHYLUS: A complete fifth-century Athenian, he was the creator of her proudest artistic achievement, tragedy. By using more than one actor he changed the form of plays from recited poetry to true dramatic dialogue, thereby making possible the sweeping grandeur of his great trilogy, THE ORESTEIA.

SOPHOCLES:The most popular tragedian of the Golden Age, he expanded the scope of classic drama by his technical innovations and lyric intensity, leaving the world such masterpieces as ANTIGONE and OEDIPUS THE KING, the play Aristotle called the perfect model of Greek tragedy.

EURIPIDES: A prolific author, Euripides wrote some one hundred plays. In contrast to his contemporaries, he brought an exciting-and, to the Greeks, a stunning-realism to the "pure and noble" form of tragedy. His influence altered drama forever, and he is regarded today as the originator of modern dramatic sensibility.

ARISTOPHANES:The most famous comic playwright of ancient Greece, he wrote what are now the only extant representative of Greek Old Comedy. His three outstanding characteristics-gross obscenity, exquisite lyricism, and a serious concern for decency and morality-may seem a strange combination to the modern reader. Aristophanes is still regarded by modern audiences as a master of risqué wit and brilliant comic invention.