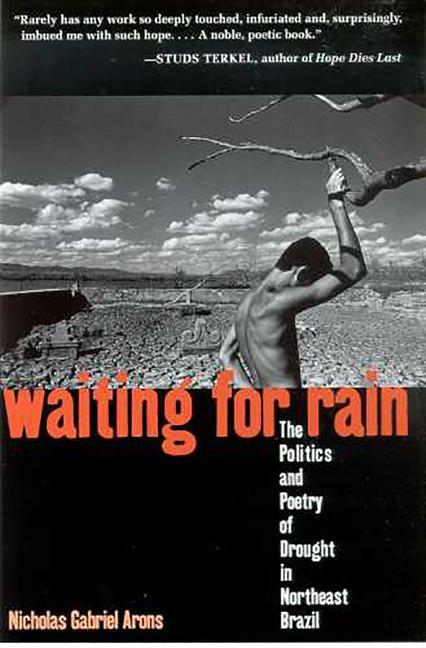 Waiting for Rain: The Politics and Poetry of Drought in Northeast Brazil

When droughts hit northeastern Brazil, thousands of rural workers are forced to abandon their homes for the cities in search of work. The double impact of drought and corruption--with politicians taking advantage of drought to buy votes and pilfer government accounts--contributes to an endless cycle of human suffering. In order to understand the impact of drought and the phenomenon of drought politics, Nicholas Arons goes beyond traditional social-science scholarship to sources such as novels, poetry, popular art, and oral history. For many people in the region, these artistic renditions of life are, ironically, a better reflection of reality than political rhetoric, government archives, and newspaper accounts-even though they are infused with myth or hyperbole. Drawing on interviews with artists and poets and on his own experiences in the Brazilian Northeast. Arons has written a poignant account of how drought has impacted the region's culture. He intertwines ecological, social, and political issues with the words of some of Brazil's most prominent authors and folk poets to show how themes surrounding drought--hunger, migration, endurance, nostalgia for the land--have become deeply embedded in Nordeste identity. Through this tapestry of sources. Arons shows that what is often thought of as a natural phenomenon is actually the result of centuries of social inequality, political corruption, and unsustainable land use. Waiting for Rain dramatically depicts a region still suffering from austere social and political realities, where drought--even during rainy seasons--is ubiquitous in the hearts and minds of its residents. A book of hope and resistance, myth and reality, and suffering andsalvation, it is also a personal narrative of self-discovery, tracing a young man's struggle to understand how human tragedy on a grand scale can exist alongside natural beauty.

Nicholas Arons has worked as a writer for international policy think tanks, at the UN High Commissioner for Refugees, at public defender legal offices, for civil liberties organizations, and as a non-violence educator. He observed the impact of economic sanctions and U.S. bombings in Iraq, publishing his findings in "Fellowship, UTNE Reader, Punk Planet, Counterpunch, Foreign Policy in Focus, " and "Iraq Under Siege." He is the recipient of a Fulbright Fellowship to research the culture of drought in Brazil and is currently a Robert McKay Scholar, a Hays Fellow and an Institute for International Law and Justice Fellow at New York University School of Law.