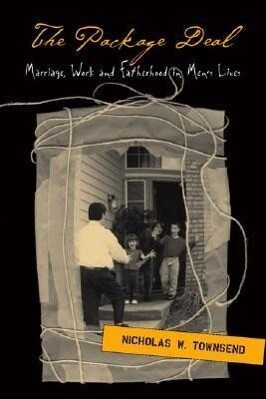 von Nicholas W. Townsend
Marriage, Work And Fatherhood In Men'S Lives. illustrations. Sprache: Englisch.
Taschenbuch
Demystifies culture's image of fatherhood in the United States. This book shows what fathers really think about fatherhood, the division of labor between fathers and mothers, the gendered difference in expectations, and the privileging of the relatio … weiterlesen
Geschenk per Mail versenden
Taschenbuch

Acknowledgments 1. Contradictions and Complications 2. Package Deals and Scripts 3. The Four Facets of Fatherhood 4. Marriage: The Women in the Middle 5. Employment as Fatherhood 6. Home Ownership: Housing the Family 7. Fathers of Fathers: Kinship and Gender 8. Implications Appendix A: The Men from Meadowview High School Appendix B: Bibliographic Essay Notes References Index

"The Package Deal is one of the best books about fatherhood to come out in a decade...Townsend is both an excellent interviewer who captures the voices of his informants and an insightful critical analyst who interprets the men's accounts in light of research on gender and families." Men and Masculinities "The Package Deal makes a powerful contribution to ongoing debates about the roles, values, and meanings of fatherhood in contemporary American society...Townsend does a magnificent job of bringing forth the voices of his respondents and providing emic views of contemporary fatherhood. His ethnography is masterful - deep, systematic, and insightful...Townsend's study breaks new ground." Anthropology of Work Review "Townsend definitively delivers an excellent contribution." INTAMS Review "Nicholas Townsend has produced an elegant, insightful, occasionally heartwrenching portrait of what it means to be a man in late twentieth-century America. His interviews reveal, as no mere statistics could, the tensions and contradictions that fathers face as they try to conform to a predominant cultural script. Neither villains nor victims, these men earn our sympathy as we witness their struggle to conform to The Package Deal." - Stanley Brandes, Professor of Anthropology, University of California, Berkeley "What do men want? In this provocative and thoughtful book about a group of men who graduated from high school in the early l970s, the gifted anthropologist Nicholas Townsend gives us an answer. Despite powerful pressures on them to spend more time with their children, to share more chores with their working wives, to cut their commutes, to give up their part in suburban sprawl, the men Townsend came to know were keeping their eye on another ball - the package deal. Stubborn? Retrograde? Yes. But with a deep appreciation for the contradictions they face, the system of pride and dignity with which they live, Townsend explains why. This is a highly important book for men, and for those who are trying to change them." - Arlie Russell Hochschild, author of The Second Shift and The Time Bind "By listening so carefully to men and women, by so carefully assessing the complex inter-connection of their lives and our cultural ideals, Townsend adds welcome nuance to the ongoing social and political discussion about fatherhood in America." - James A. Levine, Ed.D., Director, The Fatherhood Project, Families and Work Institute