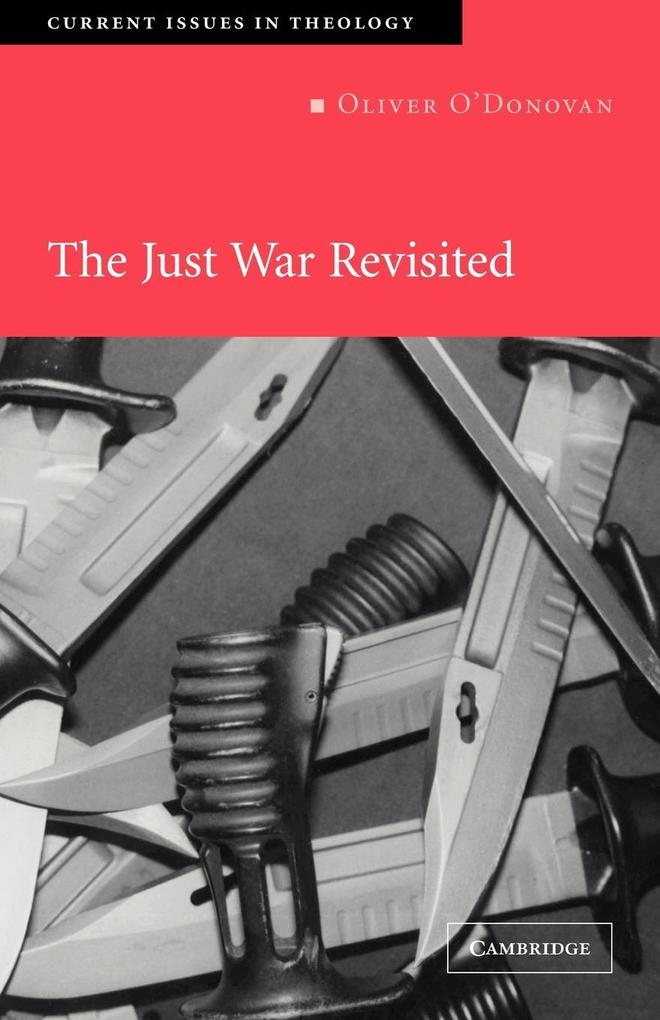 Oliver O'Donovan is Regius Professor of Moral & Pastoral Theology and Canon of Christ Church, University of Oxford. He is the author of The Problem of Self-Love in Saint Augustine (1980), Begotten or Made (1984), Peace and Certainty: A Theological Essay on Deterrence (1989) Resurrection et l'Experience Morale (1992), On the Thirty-Nine Articles: A Conversation with Tudor Christianity (1993), Common Objects of Love (2002).

'... this book provides a very good introduction to a sophisticated understanding of the just war tradition. it details the origins of the tradition, its central ideas and the dilemmas it confronts in a manner that avoids the simplistic methodology of applying the well-known criteria to particular wars that shapes much 'just war' thinking in International Relations but that is still succinct and engaging. As such, it provides a welcome and important addition to the way we think about responding to the challenge of global terrorism.' International Affairs 'A highly recommended book.' Scientific and Medical Network Review 'This is an unusual and insightful contribution to the literature on just-war theory and provides a novel focus for examining the morality of armed conflict.' Times Literary Supplement '... essential reading for anyone who thinks seriously about the process of moral decision-making in relation to war.' Theology '... characteristically learned and judicious book ... essential reading for anyone who thinks seriously about the process of moral decision-making in relation to war ... I can but applaud much of what is written here and urge that it still needs to be heard by many who pronounce too easily on the relationship of Christianity and war ... important and interesting insights ...' Theology 'The debate about the legality and wisdom of the Iraq war has been more bitter and prolonged than any such debate since Suez. Though this book by the Professor of Moral and Pastoral Theology at Oxford went to press before the war broke out it could be used to make a much needed calm and thorough contribution to the debate.' The Expository Times 'Haacker's study of the theology of Romans is an extremely rich and helpful treatment.' The Expository Times 'Reading this book at times gave me the impression of being taken behind the scenes and, say, watching a great conductor rehearsing with the orchestra. At a rehearsal one may not hear the work played right through; but this is more than made up for by the insight that is gained, the trains of thought provoked, and the unseen possibilities glimpsed. A master class is different from a performance, and this book is more like a master class than a concert.' Crucible 'To anyone who thinks that there simply cannot be anything new to say about just wars, Professor O' Donavon's book will come as a most refreshing surprise ... I found myself persuaded by his vision, time and again. The book demands careful reading, but it is non-technical. I recommend it most highly.' The Way 'This is a carefully written book that requires, and rewards, close attention ... It deals with the issues in a coherent fashion and will be of great help to any ministers seeking to clarify their own views in this area and/or wishing to help their people to do the same.' Ministry Today 'O'Donovan throughout the book shows understanding and skill in reasoning about the nuances of the just war proposal, and, though a theologian, he offers insights for the non-theologian and non-church institution as well ...' Perspectives in Religious Studies 'O'Donovan tackles with clarity, erudition and courage a morally impossible subject. He does not shrink from the 'dirty' issues that inevitable arise when thinking about justice in the context of war.' Studies in Religion