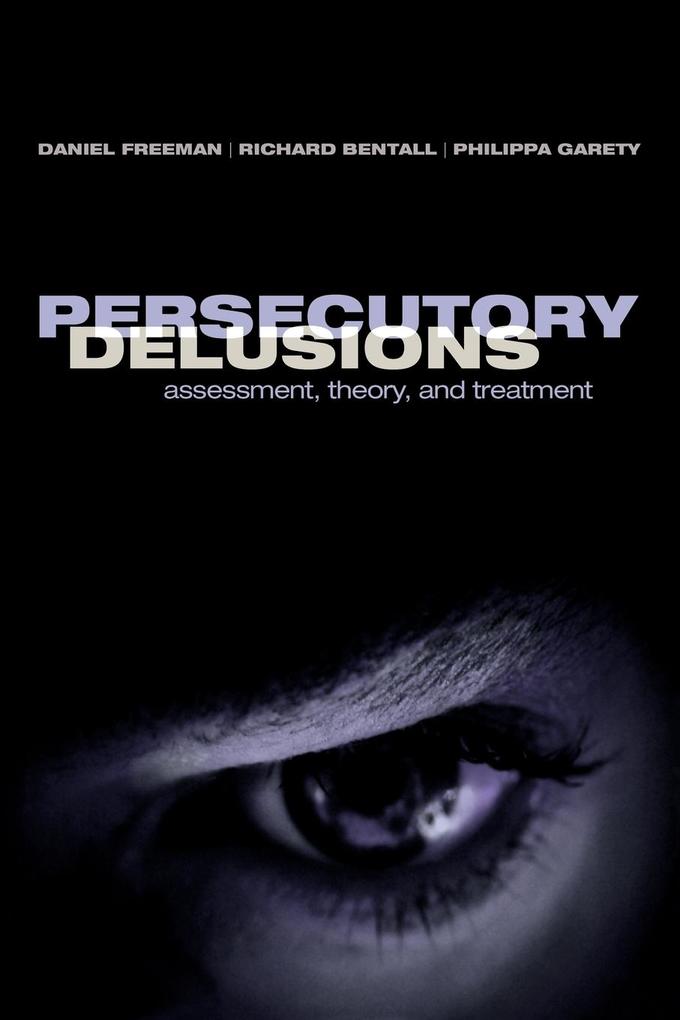 Assessment, Theory and Treatment. Paperback. Sprache: Englisch.
Taschenbuch
Delusions of persecution are common in conditions such as schizophrenia, but they also affect 10-20% of the general population. In this landmark book, the three major authorities in the field bring together the current knowledge about the assessment, … weiterlesen
Geschenk per Mail versenden
Taschenbuch

Delusions of persecution are common in conditions such as schizophrenia, but they also affect 10-20% of the general population. In this landmark book, the three major authorities in the field bring together the current knowledge about the assessment, understanding, and treatment of persecutory delusions.

Daniel Freeman is a Wellcome Trust Fellow at the Institute of Psychiatry, King's College London, and a consultant clinical psychologist in the South London and Maudsley NHS Trust. He publishes prolifically in the leading international journals, makes regular keynote addresses at international conferences, and is an Associate Editor of the British Journal of Clinical Psychology. He studied natural sciences at Cambridge University, specialising in experimental
psychology, and has completed doctorates in psychology and clinical psychology at the Institute of Psychiatry, King's College London. He is the lead author of Overcoming Paranoid and Suspicious Thoughts, the first self-help book for people affected by suspicious thoughts, and has recently written a popular
science book on paranoia, Paranoia: The 21st Century Fear

Philippa Garety studied Philosophy and Psychology (Natural Sciences) at Cambridge University in the 1970s, then undertook clinical psychology training at the Institute of Psychiatry, London, followed by a PhD. Since then she has combined clinical practice in the NHS with research. Her main focus of research has been the investigation of cognitive processes in psychosis, particularly reasoning and affective processes in delusions, together with the development of psychological treatments, such
as Cognitive Behavioural Therapy (CBT). She is interested in translating the findings of theoretical and empirical research into improvements in treatments and service provision. Her current post is as Professor of Clinical Psychology at the Institute of Psychiatry, King's College, London and Head of
Psychology for the South London and Maudsley NHS Foundation Trust.

'Persecutory Delusions is an outstanding book that provides a unique update on the assessment, biological and psychological processes, and treatment of this important clinical phenomenon. Freeman, Bentall, and Garety, all seasoned clinicians who have also made valuable contributions to theories of delusions, have assembled world experts on this topic for the first time in this welcomed volume. The state-of-the-art summary of research, theory, and clinical practice related to persecutory delusions make this book a critical resource for anyone seeking to understand or treat psychosis.' Professor Kim T. Mueser, Dartmouth Medical School ' Delusions have long been known to psychiatry - but have largely been considered a subset of 'psychosis'. However, over the last decade a range of scientists, psychologists, phenomenologists, pharmacologists, and imagers have been studying delusions in their own right, and social epidemiologists and geneticists have been looking for their causes in clinical populations and wider society. This book is the first to pull together these different perspectives under one cover. For scientists and practitioners who study and treat psychosis this is a remarkable resource. This will be a "go to" reference book for developing a comprehensive understanding of delusions.' Professor Shitij Kapur, Institute of Psychiatry, King's College London