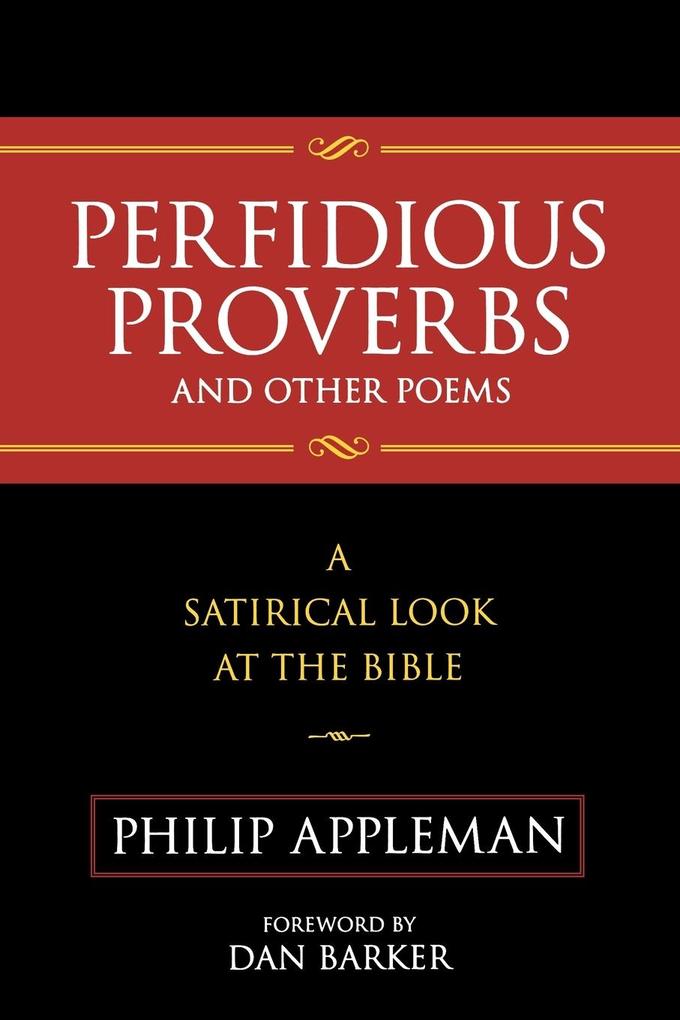 Perfidious Proverbs and Other Poems: A Satirical Look at the Bible

von Philip Appleman
Sprache: Englisch.
Taschenbuch
This collection of satirical poems homes in on the inconsistencies and downright perversities of what passes in our culture as "Holy Writ." Turning to satire, with its long and distinguished record of exposing folly and bringing enlightenment through … weiterlesen
Geschenk per Mail versenden
Taschenbuch

Titel: Perfidious Proverbs and Other Poems: A Satirical Look at the Bible
Autor/en: Philip Appleman

This collection of satirical poems homes in on the inconsistencies and downright perversities of what passes in our culture as "Holy Writ." Turning to satire, with its long and distinguished record of exposing folly and bringing enlightenment through humor, the author leaves no doubt that primitive religion posing as eternal truth is just the sort of folly that satire is meant to correct.

He lets his poetic imagination roam widely, as he takes on the roles of Eve, Noah, Sarah, Jonah, David, Mary, Jesus, Judas, and even the biblical Jehovah Himself, ("I never apologize, never explain."). We also hear from priests, televangelists, and faith healers, as well as some sensible contemporaries, commenting on what it means to live a life of reason.

At the conclusion to the introduction, the author says: "Intelligent and well-meaning people have argued for centuries against the fatal attraction of foolishness, but their efforts have been largely unproductive, partly because many people seem impervious to rational discussion. So perhaps satire is our most effective way of lighting candles in the darkness and communicating effectively to those who are immune to reason. That is, at any rate, the hope, and the rationale, of this book."

In this age of suicide bombers and resurgent fundamentalism, we need these lighted candles like never before.

Philip Appleman (New York, NY) has published eight volumes of poetry, including Karma, Dharma, Pudding & Pie (Quantuck Lane Press, 2009); New and Selected Poems, l956-l996 (University of Arkansas Press, l996); three novels, including Apes and Angels (Putnam, l989); and half a dozen nonfiction books, including the widely used Norton Critical Edition Darwin, and the Norton Critical Edition of Malthus' Essay on Population. His poetry and fiction have won many awards, including a fellowship in poetry from the National Endowment for the Arts, the Castagnola Award from the Poetry Society of America, the Friend of Darwin Award from the National Center for Science Education, and the Humanist Arts Award of the American Humanist Association. Distinguished Professor Emeritus at Indiana University, he is a founding member of the Poets Advisory Committee of Poets House, New York, a former member of the governing board of the Poetry Society of America, and a member of the Academy of American Poets, PEN American Center, Poets & Writers, Inc., and the Authors Guild of America.

Schreiben Sie eine Bewertung für: Perfidious Proverbs and Other Poems: A Satirical Look at the Bible