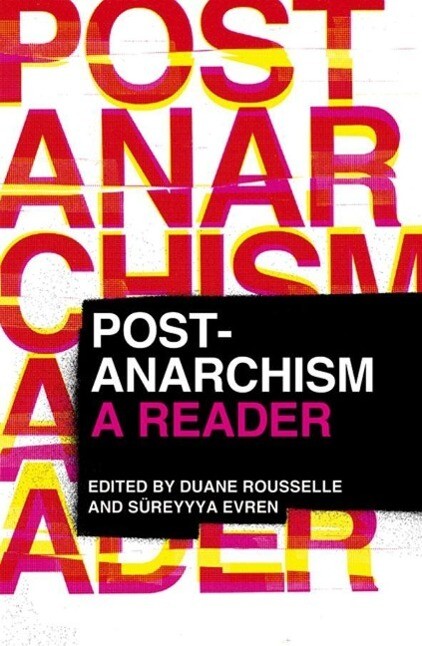 20% Rabatt sichern mit Gutscheincode: BLACK20
​
Post-anarchism has been of considerable importance in the discussions of radical intellectuals across the globe in the last decade. In its most popular form, it demonstrates a desire to blend the most promising aspects of traditional anarchist theory … weiterlesen
Dieser Artikel ist auch verfügbar als:
Geschenk per Mail versenden
Taschenbuch

Post-anarchism has been of considerable importance in the discussions of radical intellectuals across the globe in the last decade. In its most popular form, it demonstrates a desire to blend the most promising aspects of traditional anarchist theory with developments in post-structuralist and post-modernist thought. "Post-Anarchism: A Reader" includes the most comprehensive collection of essays about this emergent body of thought, making it an essential and accessible resource for academics, intellectuals, activists and anarchists interested in radical philosophy. Many of the chapters have been formative to the development of a distinctly "post-anarchist" approach to politics, aesthetics, and philosophy. Others respond to the so-called "post-anarchist turn" with caution and skepticism. The book also includes original contributions from several of today's "post-anarchists," inviting further debate and new ways of conceiving post-anarchism across a number of disciplines.

Duane Rousselle is the founder and editor of the journal Anarchist Developments in Cultural Studies and a librarian for 'The Anarchist Library' project. He has published in the International Journal of Zizek Studies. Sureyyya Evren writes on contemporary art, literature and radical politics. He has published several books in Turkish and several articles in English, German, French and Czech. He is the editor-in-chief and founder of the post-anarchist magazine Siyahi.

This book collects together key readings in post-anarchist theory and highlights the complexity and diversity of this current of thought. Acknowledging the critical attention post-anarchism has received, it provides an excellent guide to the central themes of contemporary debate. A marvellous, valuable book. -- Ruth Kinna, Senior Lecturer in Politics at Loughborough University. Editor of Anarchist Studies and author of The Beginner's Guide to Anarchism (2009). I would expect readers at all academic levels, from undergraduates and/or street activists right up to the highest levels of academia, to find this work intellectually stimulating, exciting and fresh. -- Stevphen Shukaitis, University of Essex