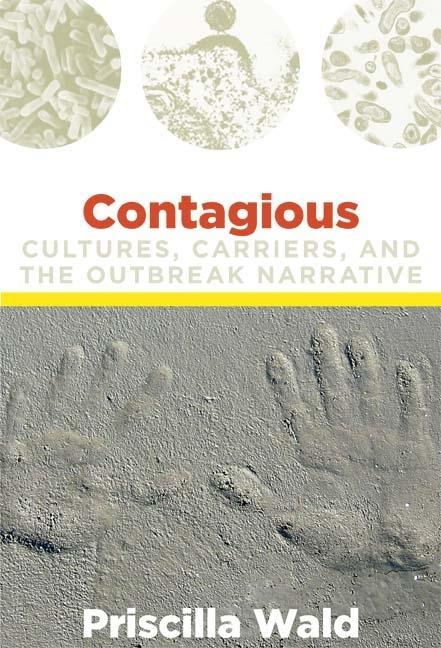 von Priscilla Wald
Cultures, Carriers, and the Outbreak Narrative. 11 illustrations. Sprache: Englisch.
Taschenbuch
Shows how narratives of contagion structure communities of belonging and how the lessons of these narratives are incorporated into sociological theories of cultural transmission and community formation.

Shows how narratives of contagion structure communities of belonging and how the lessons of these narratives are incorporated into sociological theories of cultural transmission and community formation.

Introduction; One: Imagined immunities: The epidemiology of belonging; Two: The healthy carrier: "Typhoid Mary" and social being; Three: Communicable Americanism: Social contagion and urban space; Four: Viral cultures: Microbes and politics in the Cold War; Five: "The Columbus of AIDS": The invention of "Patient Zero"; Epilogue

"Contagious is a magnificent book, notable for its prose, its expansiveness, its courage, and its creativity."--Rita Charon, founder of the Program in Narrative Medicine, Columbia University Medical Center "Rippling across the span of the twentieth century, Priscilla Wald's book traces the trajectories of 'outbreak narratives,' stories about the spread and conquest of contagious diseases. With beautifully crafted prose, Wald shows how the scientific and fictional, social and microbial intermingle as outbreak narratives confront an essential paradox: that human connectedness both imperils and saves us. Contagious is essential reading for science studies, for the field of literature and medicine, and indeed for anyone interested in the social, discursive, and cultural implications of epidemiology."--N. Katherine Hayles, University of California, Los Angeles "Priscilla Wald stunningly demonstrates how epidemics are forms of cultural autobiography, telescoping stories of outbreak and contagion that are reflected in our myths, symbols, archetypes, and social networks. Beautifully written and passionately argued, Contagious is required reading for those interested in learning how our diseases shape the ways we think about ourselves and our relationships and how our desires to be close to other people overlap with our anxieties about being infected by them."--Jonathan Michel Metzl, author of Prozac on the Couch: Prescribing Gender in the Era of Wonder Drugs "Wald argues passionately for a concerted re-examination of the way in which Americans construct the stories they tell about disease emergence, given the impact that these narratives often have on response to global disease...The scope of Wald's efforts is impressive, both in terms of timescale and interdisciplinary exploration, as is the scrutinizing gaze she brings to her task. She combines a focus on works of popular journalism and science reporting with a keen reading of specialist journals, and merges these with a careful examination of popular works of fiction and film...Wald brings an analytical ability of surgical precision, carefully guiding the reader through layers of meanings which she teases from her source texts...a richly detailed exploration...Wald has made a substantial contribution in terms of uniting theoretical insights from such fields as mythology, literature, and film studies, and applying them to the history of infectious disease epidemiology. In doing so, she makes a strong case for the importance of both the cultural critic and of interdisciplinary thinking in the preparation for future outbreaks of global disease."-Richard McKay, Medical History, April 2009

Taschenbuch
The Archive and the Repertoire
von Diana Taylor