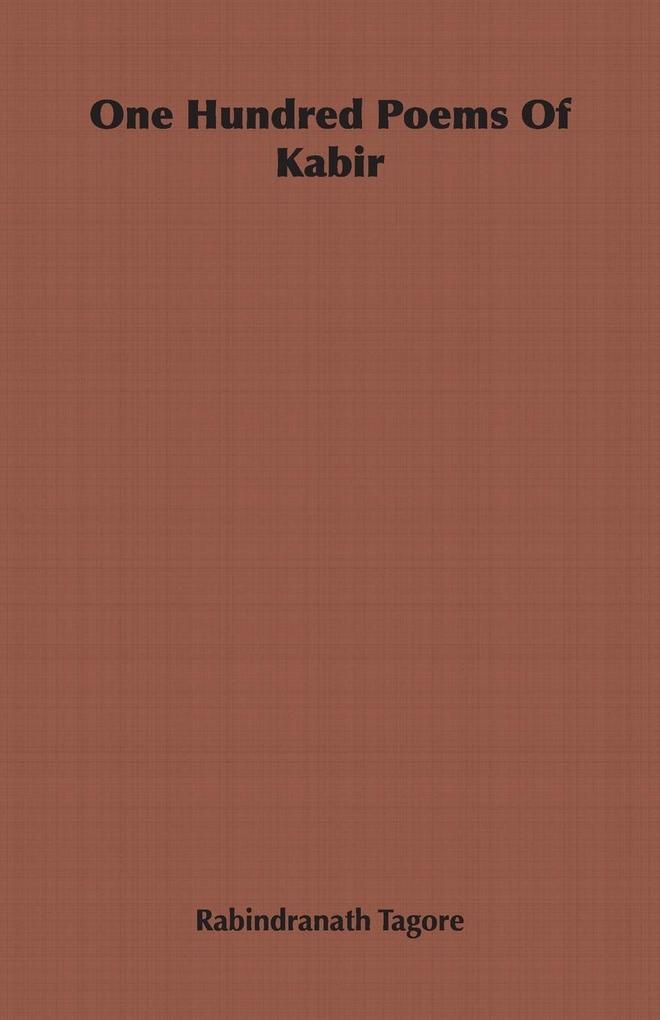 One Hundred Poems Of Kabir

Originally published in 1915, this collection features a selection of songs by the poet Kabir, one of the most interesting personalities in the history of Indian mysticism. Author: Rabindranath Tagore Language: English Keywords: Literature / Poetry / Hinduism Many of the earliest books, particularly those dating back to the 1900s and before, are now extremely scarce and increasingly expensive. Obscure Press are republishing these classic works in affordable, high quality, modern editions, using the original text and artwork. Contents Include: First Edition February 1915 THE poet Kabir, a selection from whose songs is here for the first time offered to English readers, is one of the most interesting personalities in the history of Indian mysticism. Born in or near Benares, of Mohammedan parents, and probably about the year 1440, he became in early life a disciple of the celebrated Hindu ascetic Rama nanda. Ramananda had brought to Northern India the religious revival which Ramanuja, the great twelfth century reformer of Brahmanism, had initiated in the South. This revival was in part a reaction against the increasing formalism of the orthodox cult, in part an assertion of the de mands of the heart as against the intense intellectualism of the Vedanta philosophy, the exaggerated monism which that philosophy proclaimed. It took in Ramanujas preaching the form of an ardent personal devotion to the God Vishnu, as representing the personal aspect of the Divine Nature : that mystical ct religion of love which everywhere makes its appearance at a certain level of spiritual culture, and which creeds and philosophies are powerless to kill. Though such a devotion is in digenous. in Hinduism, and finds expression in many passages of the Bhagavad Gita, there was in its mediaeval revival a large element of syncretism. Ramananda, through whom its spirit is said to have reached Kabir, appears to have been a man of wide religious culture, and full of rnissionary enthusiasm. Living at the moment in which the impassioned poetry and deep philosophy of the great Persian mystics, Attar, Sadi, Jalaluddin Rumi, and Hafiz, were exercising a powerful influence on the religious thought of India, he dreamed of reconciling this intense and personal Mohammedan mysticism with the traditional theology of Brah monism. Some have regarded both. these great religious leaders as in fluenced also by Christian thought and life : but as this is a point upon which. competent authorities hold widely divergent views, its discussion is not attempted here. We may safely assert, however, that in their teach ings, twoperhaps threeapparently antagonistic streams of intense spiritual culture met, as Jewish and IIcllemstic thought met in the early Christian Church : and it is one of the outstanding characteristics of Kabirs genius that he was able in his poems to fuse them into one. A great religious reformer, the founder of a sect to which nearly a million northern Hindus still belong,. it is yet supremely as a mystical poet that Kabir lives for us.