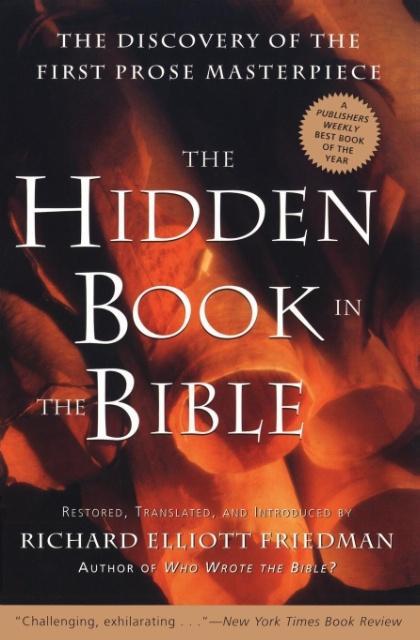 The Hidden Book in the Bible

Renowned biblical sleuth and scholar Richard Elliot Friedman reveals the first work of prose literature in the world-a 3000-year-old epic hidden within the books of the Hebrew Bible. Written by a single, masterful author but obscured by ancient editors and lost for millennia, this brilliant epic of love, deception, war, and redemption is a compelling account of humankind's complex relationship with God. Friedman boldly restores this prose masterpiece-the very heart of the Bible-to the extraordinary form in which it was originally written.

RICHARD ELLIOTT FRIEDMAN is one of the premier bible scholars in the country. He earned his doctorate at Harvard and was a visiting fellow at Oxford and Cambridge, a Senior Fellow of the American Schools of Oriental Research in Jerusalem, and a Visiting Professor at the University of Haifa. He is the Ann & Jay Davis Professor of Jewish Studies at the University of Georgia and the Katzin Professor of Jewish Civilization Emeritus of the University of California, San Diego. He is the author of Commentary on the Torah, The Disappearance of God, The Hidden Book in the Bible, The Bible with Sources Revealed, The Bible Now, The Exile and Biblical Narrative, the bestselling Who Wrote the Bible?, and most recently, The Exodus. He was an American Council of Learned Societies Fellow and was elected to membership in The Biblical Colloquium. His books have been translated into Hebrew, German, Italian, Spanish, Russian, Japanese, Polish, Hungarian, Dutch, Portuguese, Czech, Turkish, Korean, and French. He was a consultant for the Dreamworks film The Prince of Egypt, for Alice Hoffman's The Dovekeepers, and for NBC, A&E, PBS, and Nova.