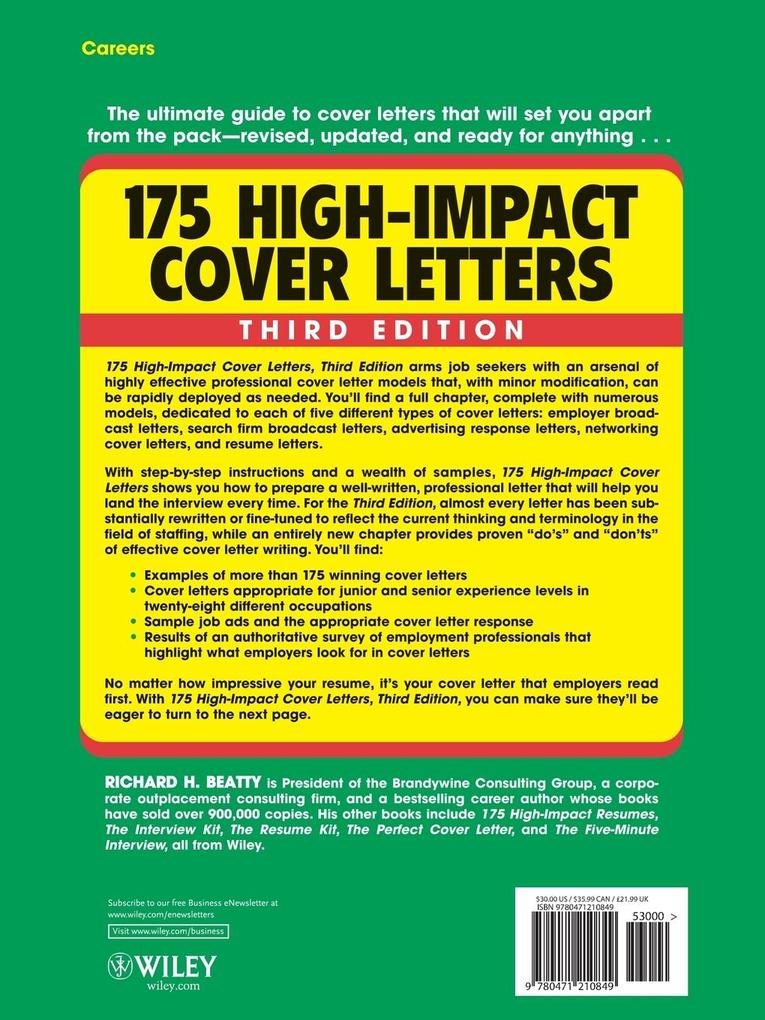 The ultimate guide to cover letters that will set you apart from the pack-revised, updated, and ready for anything . . .
175 HIGH-IMPACT COVER LETTERS
Third Edition
175 High-Impact Cover Letters, Third Edition arms job seekers with an arsenal of highly effective professional cover letter models that, with minor modification, can be rapidly deployed as needed. You'll find a full chapter, complete with numerous models, dedicated to each of five different types of cover letters: employer broadcast letters, search firm broadcast letters, advertising response letters, networking cover letters, and resume letters.
With step-by-step instructions and a wealth of samples, 175 High-Impact Cover Letters shows you how to prepare a well-written, professional letter that will help you land the interview every time. For the Third Edition, almost every letter has been substantially rewritten or fine-tuned to reflect the current thinking and terminology in the field of staffing, while an entirely new chapter provides proven "do's" and "don'ts" of effective cover letter writing. You'll find:
* Examples of more than 175 winning cover letters
* Cover letters appropriate for junior and senior experience levels in twenty-eight different occupations
* Sample job ads and the appropriate cover letter response
* Results of an authoritative survey of employment professionals that highlight what employers look for in cover letters
No matter how impressive your resume, it's your cover letter that employers read first. With 175 High-Impact Cover Letters, Third Edition, you can make sure they'll be eager to turn to the next page.

RICHARD H. BEATTY is President of the Brandywine Consulting Group, a corporate outplacement consulting firm, and a bestselling career author whose books have sold over 900,000 copies. His other books include 175 High-Impact Resumes, The Interview Kit, The Resume Kit, The Perfect Cover Letter, and The Five-Minute Interview, all from Wiley.