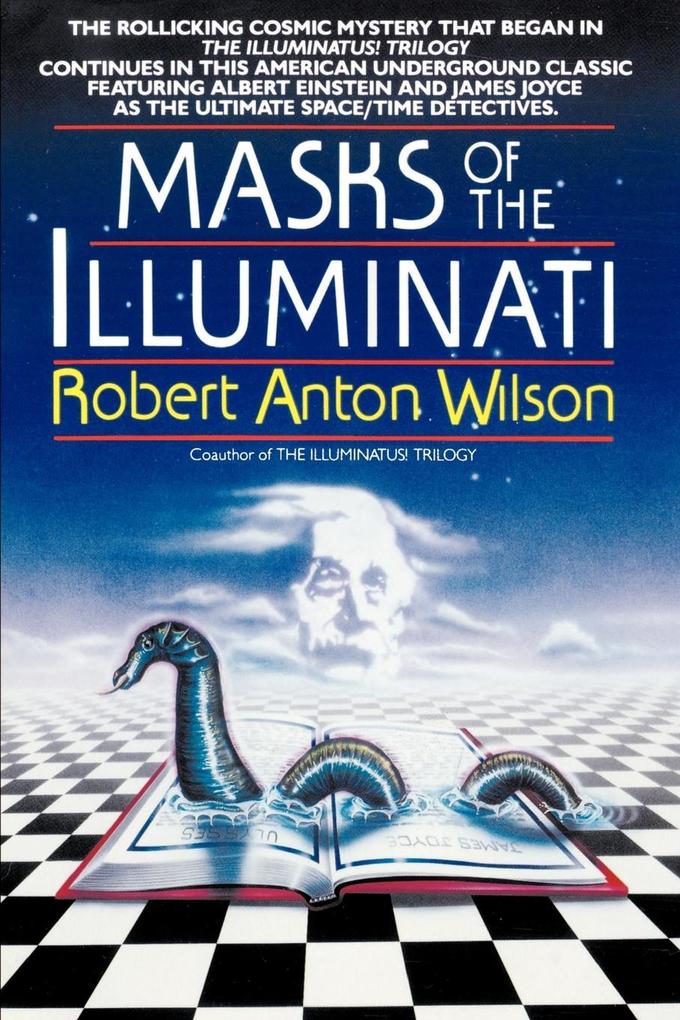 Masks of the Illuminati

This American underground classic is a rollicking cosmic mystery featuring Albert Einstein and James Joyce as the ultimate space/time detectives.

One fateful evening in a suitably dark, beer-soaked Swiss rathskeller, a wild and obscure Irishman named James Joyce would become the drinking partner of an unknown physics professor called Albert Einstein. And on that same momentous night, Sir John Babcock, a terror-stricken young Englishman, would rush through the tavern door bringing a mystery that only the two most brilliant minds of the century could solve . . . or perhaps bringing only a figment of his imagination born of the paranoia of our times.

An outrageous, raunchy ride through the twists and turns of mind and space, Masks of the Illuminati runs amok with all our fondest conspiracy theories to show us the truth behind the laughter . . . and the laughter in the truth.

Praise for Masks of the Illuminati

"I was astonished and delighted . . . Robert Anton Wilson managed to reverse every mental polarity in me, as if I had been pulled through infinity."-Philip K. Dick

"A dazzling barker hawking tickets to the most thrilling tilt-a-whirls and daring loop-o-planes on the midway to a higher consciousness."-Tom Robbins

"Wilson is one of the most profound, important, scientific philosophers of this century-scholarly, witty, hip, and hopeful."-Timothy Leary

Author of some 35 books including Cosmic Trigger, Prometheus Rising, Schrodinger's Cat Trilogy, and co-author of the Illuminatus! Trilogy, Robert Anton Wilson (RAW or Bob) was a futurist, author, lecturer, stand-up comic, guerrilla ontologist, psychedelic magician, outer head of the Illuminati, quantum psychologist, Taoist sage, Discordian Pope, Struthian politician . . . maybe. Bob described his work as an "attempt to break down conditioned associations, to look at the world in a new way, with different perspectives recognized as models or maps, and no one model elevated to the truth". His goal being "to try to get people into a state of generalized agnosticism, not agnosticism about God alone but agnosticism about everything." His "Maybe Logic" inspired the creation of the Maybe Logic Academy. Google "Robert Anton Wilson" for mosbunall info.