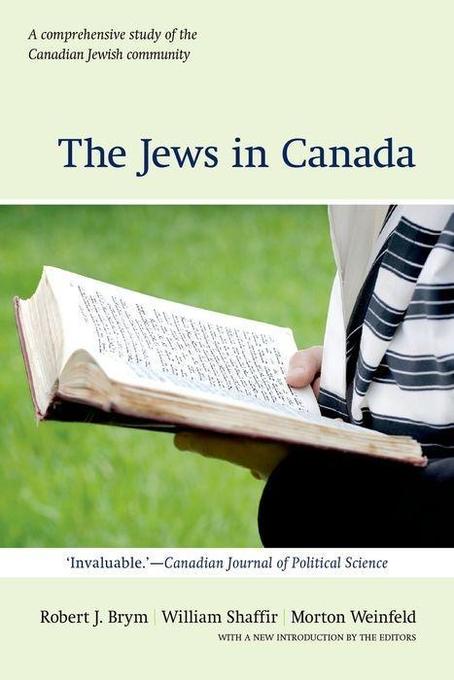 The Jews in Canada

von Robert J. Brym, William Shaffir, Morton Weinfeld
Revised. Sprache: Englisch.
Taschenbuch
Ethnic groups in Canada may be successful, persecuted, cohesive, or endangered; only Canada's Jews appear to embody all of these characteristics simultaneously. Canadian Jewry is enduringly fascinating, worth knowing about because the community is an … weiterlesen
Geschenk per Mail versenden
Taschenbuch

Ethnic groups in Canada may be successful, persecuted, cohesive, or endangered; only Canada's Jews appear to embody all of these characteristics simultaneously. Canadian Jewry is enduringly fascinating, worth knowing about because the community is an archetype of multiculturalism as it confronts the difficulties and advantages of ethnicity in the modern world. By examining the achievements of the community, and the challenge of its attempt to survive the exigencies of modern life, The Jews in Canada clarifies not only the evolution of Canada's Jewish community but also the evolution of ethnicity in Canadian society. The Wynford edition includes a comprehensive new introduction by the editors updating key findings for the twenty-first century.

Introduction to the Wynford Edition by the Editors; Preface; PART ONE: CANADIAN JEWS IN COMPARATIVE PERSPECTIVE; Introduction; The Contours of Canadian Jewish History; The Rise and Decline of Canadian Jewry?; An Overview of the Canadian Jewish Community; PART TWO: ANTI-SEMITISM; Introduction; The Swastika as Dramatic Symbol: A Case-Study of Ethnic Violence in Canada; Hate on Trial: The Zundel Affair, The Media, Public Opinion in Canada; The Distribution of Anti-Semitism in Canada in 1984; PART THREE: CULTURE; Introduction; Separation from the Mainstream in Canada: The Hassidic Community of Tash; Reflections on the Jewish Polity and Jewish Education; Yiddish in Canada: Picture and Prospects; PART FOUR: INTERCOMMUNAL RELATIONS; Introduction; The Jews of Quebec: An Overview; Jewish-Ukranian Relations in Canada since World War II and the Emergence of the Nazi War Criminal Issue; The Ethnic Sub-Economy: Explication and Analysis of a Case Study of the Jews of Montreal; Anomie, Opportunity, and the Density of Ethnic Ties: Another View of Jewish Outmarriage in Canada; PART FIVE: POLITICS; Introduction; The Canadian Jewish Polity: Power and Leadership in the Jewish Community; Left of Centre? The Canadian Jewish Electorate, 1953-1983; Continuity and Criticism: North American Jews in Israel; PART SIX: THE FAMILY AND THE CHANGING ROLE OF JEWISH WOMEN; Introduction; Marital Status and Fertility Among Sub-Groups of Canadian Jews; If I Cannot Dance to It, It's Not My Revolution: Jewish Feminism in Canada Today; Aging in the Family Context: Are Jewish Families Different?; PART SEVEN: MINORITIES; Introduction; Jewish Survival in Small Communities in Canada; The Persistence of Invisible Poverty Among Jews in Canada; Sephardim and Ashkenazim in Montreal; Soviet Jewish Emigres in Toronto: Ethnic Self-Identity and Issues of Integration; Aliyah and Return Migration of Canadian Jews: Personal Accounts of Incentives and of Disappointed Hopes; Index; List of Contributors