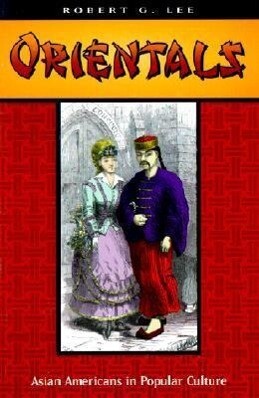 von Robert Lee
Asian Americans in Popular Culture. New ed. 19 b&w photographs. Sprache: Englisch.
Taschenbuch
Sooner or later every Asian American must deal with the question, "Where do you come from?" It is probably the most familiar if least aggressive form of racism. It is a tip off to the persistent notion that people of Asian ancestry are not real Ameri … weiterlesen
Geschenk per Mail versenden
Taschenbuch

Sooner or later every Asian American must deal with the question, "Where do you come from?" It is probably the most familiar if least aggressive form of racism. It is a tip off to the persistent notion that people of Asian ancestry are not real Americans, that "Orientals" never really stop being loyal to a foreign homeland, no matter how long they or their family have been in this country. Confronting the cultural stereotypes that have been attached to Asian Americans over the last 150 years, Robert G. Lee seizes the label "Oriental" and asks where it came from.

Preface: Where Are You From? Introduction: Yellowface 1. The "Heathen Chinee" on God's Free Soil 2. The Coolie and the Making of the White Working Class 3. The Third Sex 4. Inner Dikes and Barred Zones 5. The Cold War Origins of the Model Minority 6. The Model Minority as Gook 7. After LA 8. Disobediant Citizenship: Deconstructing the Oriental Notes Index

"Orientals is an indispensable book about the United States. In it, 'American culture' emerges as a site in which racial meanings about Asia and Asian-Americans are made and remade in relation to specific historical crises, whether the settling of the western frontier, the consolidation of the European immigrant working class, the establishment of the nuclear family and middle class domesticity, World War II, Cold War liberalism or the global restructuring of the economy." --Lisa Lowe, author of Immigrant Acts: On Asian-American Cultural Politics "Bob Lee makes a major contribution to cultural studies and to ethnic studies with this insightful, engaging, and original examination of anti-Asian imagery in the U.S. Lee shows how different historical moments produce markedly different images and how changes in ethnic stereotypes register and reflect broader structural and cultural transformations." --George Lipsitz, author of The Possessive Investment in Whiteness: How White People Profit from Identity Politics (Temple) "A compelling critique of race from an Asian American viewpoint... Given the increasingly non-European composition of the U. S. population, Lee's work provides an excellent prism to view the flawed North American self-image." --Booklist "...an outstanding examination of Asian American stereotypes in nineteenth- and twentieth-century popular culture." --Journal of American Ethnic History

Taschenbuch
Doing What Had To Be Done
von Soo-Young Chin