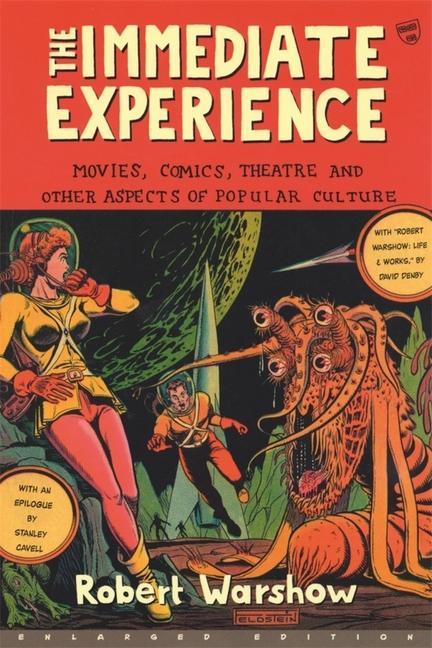 The Immediate Experience: Movies, Comics, Theatre, and Other Aspects of Popular Culture

von Robert Warshow
Enlarged. Sprache: Englisch.
Taschenbuch
This collection of essays, which originally appeared as a book in 1962, is virtually the complete works of an editor of "Commentary" magazine who died, at age 37, in 1955. Long before the rise of Cultural Studies as an academic pursuit, in the pages … weiterlesen
Geschenk per Mail versenden
Taschenbuch

This collection of essays, which originally appeared as a book in 1962, is virtually the complete works of an editor of "Commentary" magazine who died, at age 37, in 1955. Long before the rise of Cultural Studies as an academic pursuit, in the pages of the best literary magazines of the day, Robert Warshow wrote analyses of the folklore of modern life that were as sensitive and penetrating as the writings of James Agee, George Orwell, and Walter Benjamin. Some of these essays--notably "The Westerner," "The Gangster as Tragic Hero," and the pieces on the "New Yorker," "Mad Magazine," Arthur Miller's "The Crucible," and the Rosenberg letters--are classics, once frequently anthologized but now hard to find.
Along with a new preface by Stanley Cavell, "The Immediate Experience" includes several essays not previously published in the book--on Kafka and Hemingway--as well as Warshow's side of an exchange with Irving Howe.

Robert Warshow (1917-1955) was a member of the community that has come to be known as the "New York Intellectuals." He was an editor of Commentary magazine and an astute critic of cinema. He tragically died of a heart-attack at the age of 37. At the time of his death in 1975, Lionel Trilling was University Professor at Columbia University. Stanley Cavell is Walter M. Cabot Professor, Emeritus, of Aesthetics and the General Theory of Value, Harvard University.

The way we really feel about our lives' (and our movies, and our comic books) is precisely what [Warshow is trying to get at. European critics like Siegfried Krakauer or Theodor Adorno had tried to neutralize the mind-bending power of mass culture with big theories, but Warshow believed that his best weapon against ideology was his personal experience as a moviegoer and reader...A claim often made about Warshow is that with his affection for the less-than-highbrow arts and insistence on the audience's responses, he was a forerunner of what would become cultural studies. But...his most important attribute--and legacy--was a well-developed civic consciousness...He demanded of art, low or middle or high, that it be responsible...he made you understand that responsibility is inseparable from integrity. -- Judith Shulevitz New York Times Book Review 20011230 [Warshow's] writing on film remains remarkably fresh...[He] wrote so well because he wrote so honestly about how movies affected him...[He] was unusually gifted in registering the emotional impact of such genres as the western and the gangster film, which he correctly saw as the myths of our society...Although movie-going is a solitary act, many critics write as if they are members of a gang, trying to please some clique or ideology outside the movie theater. Warshow refused to do this; he distrusted theories or methods that denied the immediacy of the movie-going experience. Because he remained true to his own response, and recorded these responses with great eloquence, his writing remains alive, against all odds. -- Jeet Heer National Post 20020111 To read these pieces in any order whatsoever is to come into contact with a unique mind. Warshow wrote about literature, politics, art films, comic strips, the Jews, the theater, and, of course, American movies--the subject for which he is probably best remembered by many of his readers. To all these subjects he brought a sensibility that was in its own way extremely tough, at the same time most forgiving, and unblinkingly open to a very broad variety of human possibilities. -- Midge Decter Commentary 20020401 The Immediate Experience, an anthology of Warshow's pop-cult criticism that first appeared posthumously in 1962, has now received a deluxe reissue, featuring thoughtful appreciations by David Denby and Stanley Cavell, along with eight previously uncollected essays. In addition to Warshow's extensive film writing, the book includes analytical discourses on subjects ranging from Arthur Miller and Clifford Odets to Franz Kafka and Gertrude Stein, to George Herriman's comic strip Krazy Kat...The Immediate Experience is not only a paradigm of trenchant film criticism, but also a fundamental text in the discipline of cultural studies.' -- Frank Halperin Philadelphia City Paper 20020207 Warshow is considered to be an inspiration by popular contemporary critics like David Denby. Writing mostly in Commentary and Partisan Review, Warshow was one of the first American intellectuals to take Krazy Kat and Charlie Chaplin as a fact of life and engage seriously with popular culture. -- Daniel Belasco Jewish Week 20020307 The Immediate Experience collects almost all we have of [Warshow's] supple mind. Long out of print, now reissued and expanded, it is likely to reestablish its author as a preeminent observer of American pop...Warshow was a pioneer, writing such stuff at a time when almost no one else was and writing it better than few have since. A brilliantly pithy sentence from the preface sums up his aim, states his influence, and points to the force of his prose: "A man watches a movie, and the critic must acknowledge that he is a man." -- Troy Patterson Entertainment Weekly 20020222 The essays in The Immediate Experience remain a beacon, a light to begin to show the way to how we might escape our present cultural confusions. -- Christopher Lehmann-Haupt Los Angeles Times 20020324 [Warshow] was a very influential mind of his times. This is a virtually all-inclusive anthology of his published writings. After a half-century, his political zeal now seems almost ridiculously naive, but his appreciation of the important energies of popular culture--the vitality of the good stuff in the mass market--today seems prescient of many of today's soundly accepted values...This is both nostalgic and provocative social criticism. -- Michael Pakenham Baltimore Sun 20020517 There are few critics whose work truly resonates with a reader...The Immediate Experience provides the most complete record available of the work of just such a critic, whose ability to inspire remains fully intact. -- Craig Teper Variety 20020317 It's a joy to have The Immediate Experience back in print, and with eight new additions. (All are book reviews; they afford us the opportunity to judge Warshow's interaction with Kafka, Hemingway, Gertrude Stein, and Shalom Aleichem)...The quality of Warshow's prose matches the quality of his thinking...Read Warshow and feel your mind expand. -- Steve Vineberg Boston Phoenix 20020524