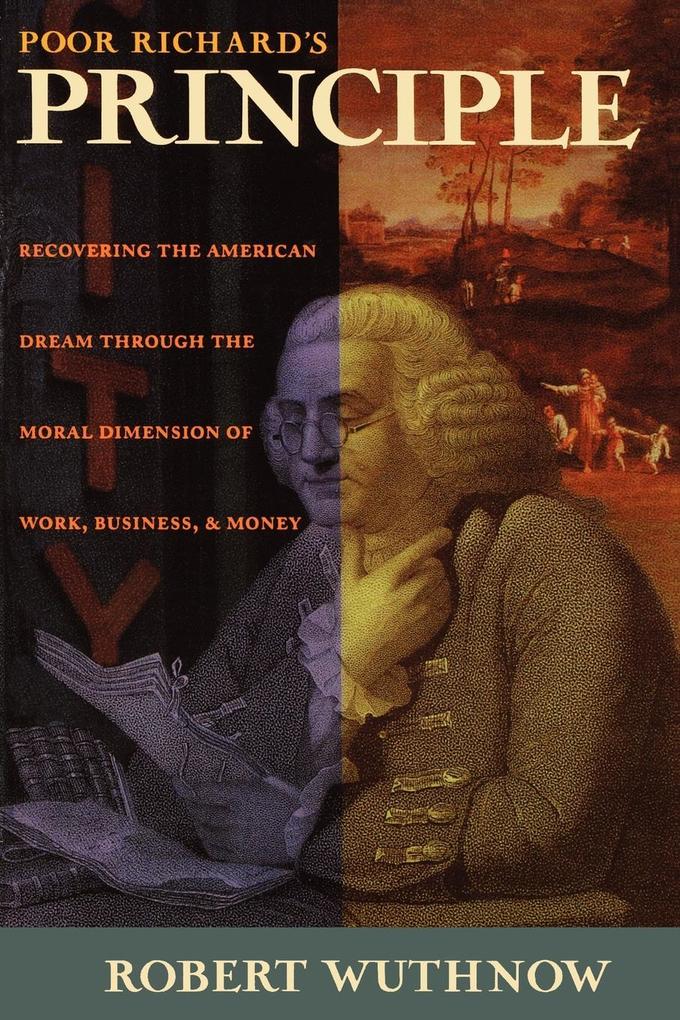 von Robert Wuthnow
Recovering the American Dream through the Moral Dimension of Work, Business, and Money. Paperback. Sprache:…
Taschenbuch
The American Dream is in serious danger, according to Robert Wuthnow--not because of economic conditions, but because its moral underpinnings have been forgotten. In the past this vision was not simply a formula for success, but a moral perspective t … weiterlesen
Geschenk per Mail versenden
Taschenbuch

Recovering the American Dream through the Moral Dimension of Work, Business, and Money.
Paperback.
Sprache: Englisch.

The American Dream is in serious danger, according to Robert Wuthnow--not because of economic conditions, but because its moral underpinnings have been forgotten. In the past this vision was not simply a formula for success, but a moral perspective that framed our thinking about work and money in terms of broader commitments to family, community, and humanitarian values. Nowadays, we are working harder than ever, and yet many of us feel that we are not realizing our higher aspirations as individuals or as a people. Here Wuthnow examines the struggles in which American families are now engaged as they try to balance work and family, confront the pressures of consumerism, and find meaning in their careers. He suggests that we can find economic instruction and inspiration in the nation's past--in such figures as Benjamin Franklin, for instance, who was at once the prudent Poor Richard, the engaged public person, and the enthusiastic lover of life.

Drawing on first-hand accounts from scores of people in all walks of life and from a national survey, the book shows that work and money cannot be understood in terms of economic theories alone, but are inevitably rooted in our concepts of ourselves and in the symbolic rituals and taboos of everyday life. By examining these implicit cultural understandings of work and money, the book provides a foundation for bringing moral reasoning more fully to bear on economic decisions. It re-examines the moral arguments that were prominent earlier in our history, shows how these arguments were set aside with the development of economistic thinking, and suggests their continuing relevance in the lives of people who have effectively resisted the pressures of greater financial commitments. Demonstrating that most Americans do bring values implicitly to bear on their economic decisions, the book shows how some people are learning to do this more effectively and, in the process, gain greater control over their work and finances. At a time when policymakers are raising questions about the very survival of the American dream, Poor Richard's Principle offers an analysis of how moral restraint can once again play a more prominent role in guiding our thinking.

Acknowledgments Ch. 1Having It All - and Wanting More: The Social Symptoms of Cultural Distress Ch. 2Making Choices: From Short-Term Adjustments to Principled Lives Ch. 3Moral Tradition: The Lost Ambivalence in American Culture Ch. 4Shifting Perspectives: The Decoupling of Work and Money Ch. 5Accounts: The Changing Meanings of White-Collar Work Ch. 6(Not) Talking about Money: The Social Sources and Personal Consequences of Subjectivization Ch. 7Getting and Spending: The Maintenance and Violation of Symbolic Boundaries Ch. 8The Working Class: Changing Conditions and Converging Perspectives Ch. 9Family LIfe: The New Challenges of Balancing Multiple Commitments Ch. 10Rediscovering Community: The Cultural Potential of Caring Behavior and Voluntary Service Ch. 11The Quest for Spirituality: Ambiguous Voices from America's Religious Communities Ch. 12Materialism and Moral Restraint: The Role of Ascetic and Expressive Values Ch. 13The Possibilities of Moral Discourse: Limitations, Pathologies, and Challenges Methodology Notes Index

"Through dozens of citizens who talked with him, Wuthnow records the continuing stresses in modern economic life... [The] model of an ideal life, Wuthnow maintains, evolved before the Civil War into two schools of social thought, which he calls 'ascetic' and 'expressive' moralism... Wuthnow's impressive body of polls and interviews convinces us that both of these modern traditions remain powerful influences in American life today."--Richard Parker, The New York Times Book Review "In this sociological tract for our times, Wuthnow reconsiders the nature and meaning of the American dream in the late twentieth century. This book goes much further than merely recounting the manifold failings of American economics and culture in the pursuit of happiness... Wuthnow perceives a moral vacuum at the core of American society, and recommends that Americans systematically revisit the cultural imperatives of an earlier age to reinvent the paradigm of personal success in late capitalism. An important and timely work."--The Virginia Quarterly Review