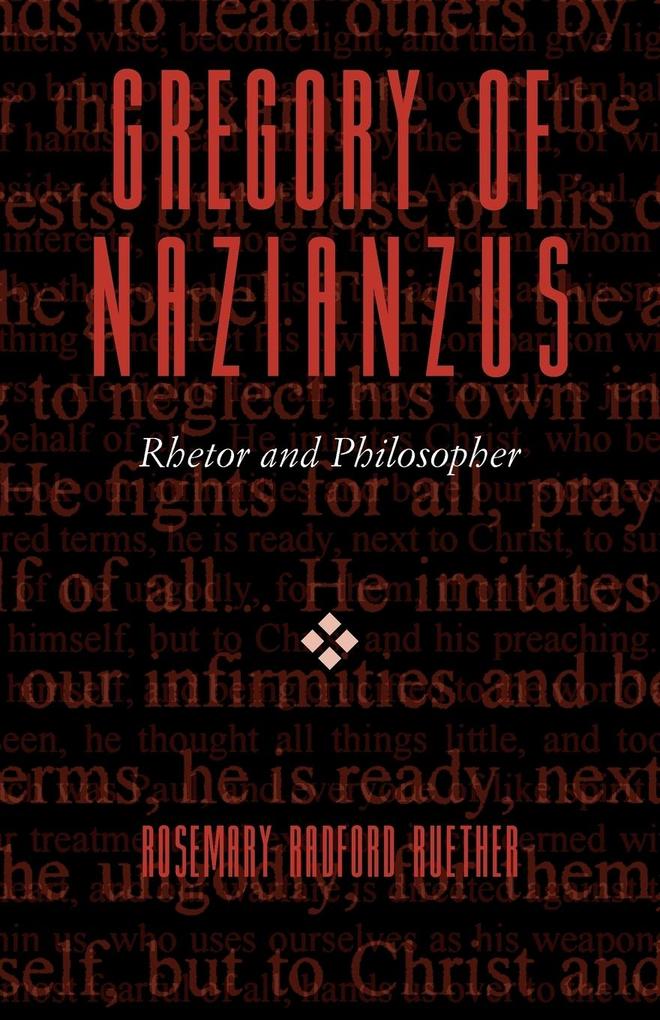 von Rosemary Radford Ruether
Paperback. Sprache: Englisch.
Taschenbuch
This study on the life and thought of St. Gregory of Nazianzus was written by feminist theologian and Patristic scholar, Rosemary Radford Ruether, as her doctoral dissertation and originally published by Oxford University Press in 1969. The focus of … weiterlesen
Geschenk per Mail versenden
Taschenbuch

This study on the life and thought of St. Gregory of Nazianzus was written by feminist theologian and Patristic scholar, Rosemary Radford Ruether, as her doctoral dissertation and originally published by Oxford University Press in 1969. The focus of the study is the tension and conflict in the life of Gregory of Nazianzus and his contemporary Christian companions, such as Basil the Great and Gregory Nyssa, between rhetoric and philosophy.

This is a conflict that has deep roots in Greek culture, going back to the time of Isocrates and Plato. It reflects two major streams of Greek culture, the literary tradition of classical education and public argumentation, with its often specious use of language, and the philosophical search for truth which saw itself as culminating in spiritual communion with the Good, the True and the Beautiful. In the Christian context of the fourth century A.D. this conflict had been translated into a tension between classical literary education, which still shaped the socialization of Christian leaders such as Gregory and informed the patterns of their preaching, and their search for contemplative union with God. Gregory and others spoke of the ascetic life of emerging Christian monasticism as "the philosophical life," thus incorporating this tension between rhetoric and philosophy into their own lives.

For Gregory and other Christian leader of his time, Christians should renounce worldly ambition and even Christian positions of power, such as episcopacy, to pursue the separated life of monastic discipline, yet even in this ascetic retirement they found it difficult not to continue to employ the much-loved literary culture of their youthful education. This book shows how this tension played out in Gregory's own life, including his relation with his friend and school companion, Basil the Great, who shared the quest for the monastic life with Gregory, but later became a bishop and sought to secure his power against church rivals by forcing episcopacy upon both Gregory Nazianzus and his own brother, Gregory Nyssa.

The volume also studies the way in which Gregory of Nazianzus employs rhetorical conventions to shape his own literary style in his sermons and treatises. It then focuses on the anthropology and cosmology that underlay Gregory's understanding of the "philosophical life" as a journey of communion with God. In the final chapter it reviews Gregory's own struggles to find a modus vivendi between the two cultures of classical literary education and the ascetic, contemplative life. This is a struggle that did not end with the fourth century, but continued to shape a Christian culture that adopted classical Greek literature as the basis of its educational curriculum and yet also taught the ideals of the soul's quest for God.

Rosemary Radford Ruether has been a pioneer Christian feminist theologian for over three decades and is among the most widely read theologians in the world. Her book, Sexism and God-Talk, a classic in the field of theology, remains the only systematic feminist treatment of the Christian symbols to date. With wide-ranging scholarship, Dr. Ruether has written and edited over thirty books and hundreds of articles and reviews.