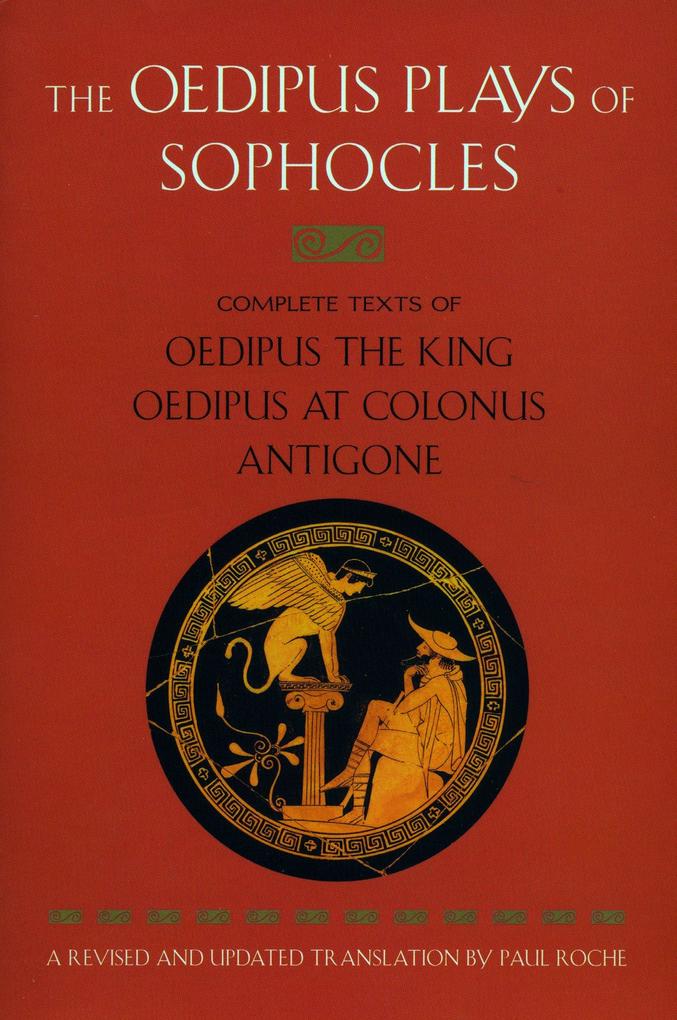 The Oedipus Plays of Sophocles: Oedipus the King; Oedipus at Colonus; Antigone

15% Rabatt³ sichern mit Gutscheincode: 15PROZENT
​
A collection that includes the complete texts of Sophocles' Oedipus the King, Oedipus at Colonus, and Antigone-translated by Paul Roche.

A collection that includes the complete texts of Sophocles' Oedipus the King, Oedipus at Colonus, and Antigone-translated by Paul Roche.

Revising and updating his classic 1958 translation, Paul Roche captures the dramatic power and intensity, the subtleties of meaning, and the explosive emotions of Sophocles' great Theban trilogy. In vivid, poetic language, he presents the timeless story of a noble family moving toward catastrophe, dragged down from wealth and power by pride, cursed with incest, suicide, and murder.

William Carlos Williams called the Roche translation of Antigone "brilliantly successful...as spirited and powerful as the original must have been." Roche's versions of the Oedipus plays are both stunning and sympathetic, awe-inspiring and intimate, and bring the elemental myths of ancient Greece to life for modern readers.

Included in this edition are a glossary of classical names, notes on pronunciation and meter, suggestions for production and acting, and historical material, which offer the reader a greater appreciation of Sophocles' dramatic genius.

Sophocles was born at Colonus, just outside Athens, in 496 BC, and lived ninety years. His long life spanned the rise and decline of the Athenian Empire; he was a friend of Pericles, and though not an active politician he held several public offices, both military and civil. The leader of a literary circle and friend of Herodotus, he was interested in poetic theory as well as practice, and he wrote a prose treatise On the Chorus. He seems to have been content to spend all his life at Athens, and is said to have refused several invitations to royal courts.

Sophocles first won a prize for tragic drama in 468, defeating the veteran Aeschylus. He wrote over a hundred plays for the Athenian theater, and is said to have come first in twenty-four contests. Only seven of his tragedies are now extant, these being Ajax, Antigone, Oedipus the King, Women of Trachis, Electra, Philoctetes, and the posthumous Oedipus at Colonus. A substantial part of The Searches, a satyr play, was recovered from papyri in Egypt in modern times. Fragments of other plays remain, showing that he drew on a wide range of themes; he also introduced the innovation of a third actor in his tragedies. He died in 406 BC.


Paul Roche, a distinguished English poet and translator, is the author of The Bible's Greatest Stories. His other translations include Euripides: Ten Plays, Oedipus Plays of Sophocles, and The Orestes Plays of Aeschylus.