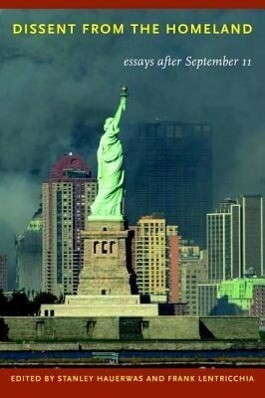 Dissent from the Homeland

Noted scholars, theologians, and others question the U.S. government's reaction to the September 11th attack on the World Trade Center.

"Americans seeking intelligent, articulate and decidedly critical commentary on these matters should read Dissent from the Homeland... [E]ven if readers dispute some or even most of the arguments advanced in 'Dissent from the Homeland,' they would be foolish to ignore them." --Robert Neralich, Arkansas Democrat-Gazette "Take this book to New York City, sit down by Ground Zero, and read it and weep."--Stephen H. Webb, Reviews in Religion and Theology "The South Atlantic Quarterly is an august journal, intensely conscious of its own distinguished history. In a publisher's forward, independent of the editorial introduction, Steve Cohn draws comparison between the September 11 volume and the first issues which came out in the early 1990s."-- Mark Gibson, Cultural Studies Review "[Dissent from the Homeland does] a good job of dispelling some of the more risible and discursive fictions that pertain to the event and its perpetrators."-- Julian Reid, Contemporary Political Theory "Each essay in the collection wakens the reader, urges a change in the tone of the American response to terror... The well-written and thoughtful essays call to those quiet voices who allow their leaders carte blanche. The experience of Dissent from the Homeland is a bit like reading Thoreau on Civil Disobedience: the reader comes away determined to be morally stronger. In this society we should count that a success--we need more intellectuals kicking against the pricks."--Christopher Porter, Symploke "This is without a doubt one of the most powerful and timely books that I have ever had the opportunity to review... There is much to enchant the scholar of religion in this collection, with some perceptive discussions of the signification of location (homeland, Virgin Land, and Ground Zero) and such signifiers as the flag and blood, not forgetting apocalypticism, theodicy, and eschatology."--Rosalind J. Hackett, Journal of Contemporary Religion