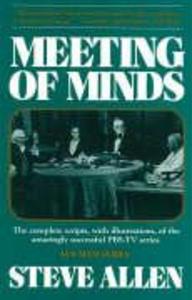 The man who invented the television talk show surpassed even himself when he created Meeting of Minds, the award-winning series that captured America's imagination. These four volumes offer the original scripts from the series, including material edited from the broadcast versions that ran from 1977 to 1981 on PBS stations nationwide.

Many believe that Meeting of Minds is the most brilliant series ever to be written for television. The show provides a groundbreaking opportunity to be exposed to ideas by way of a medium not normally known for its intellectual vigor.

Indeed, Meeting of Minds grew out of Allen's frustration with the mediocrity of the average network program. He envisioned the show as a stimulating round-table discussion conducted like any other talk show - except that the participants would be actors portraying some of the greatest minds and most prominent figures of history. Accordingly, such characters as Aristotle, Catherine the Great, Oliver Cromwell, Emily Dickinson, Margaret Sanger, Gandhi, Thomas Paine, Cleopatra, Theodore Roosevelt, and St. Thomas Aquinas appear in startlingly effective juxtaposition, their characters revealed through brilliantly conceived dialogue.

The scripts for Meeting of Minds make for excellent reading, distilling an enormous amount of research into a lively format that has the undeniable veracity of historical fact. The result is unfailingly witty, thought-provoking, and geniunely entertaining.

Steve Allen's lucidity and fertile intelligence are evident on every page. Meeting of Minds remains one of the freshest, most delightful ways of gaining historical perspective ever devised, an incomparable tour de force with the power to make history come alive.

Steve Allen (1921-2000) was known as television's renaissance man. He authored over fifty books and composed over 8,500 songs. Allen was the creator and original host of the Tonight Show and the award-winning PBS series Meeting of Minds. You can learn more about this legendary entertainer by visiting his offical Web site at SteveAllen online.com.