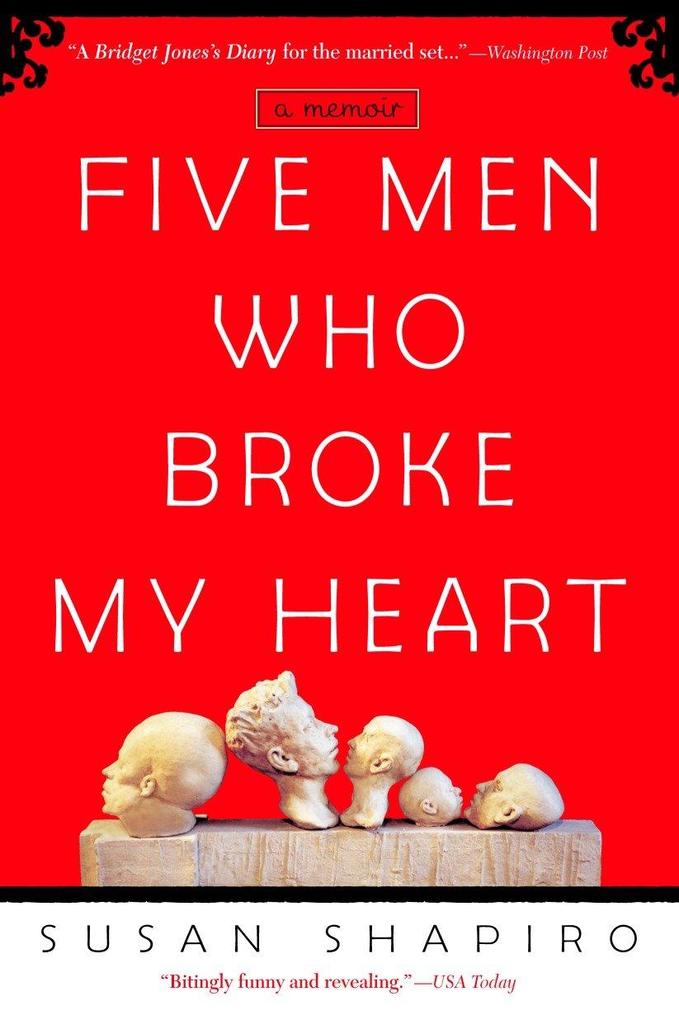 Five Men Who Broke My Heart: A Memoir

von Susan Shapiro
Sprache: Englisch.
Taschenbuch
In this honest, hilarious, fiercely intelligent memoir, journalist Susan Shapiro dares to do what every woman dreams of: track down the five men who'd broken her heart and find out what really went wrong. Between the ages of thirteen and thirty-fiv … weiterlesen
Geschenk per Mail versenden
Taschenbuch

In this honest, hilarious, fiercely intelligent memoir, journalist Susan Shapiro dares to do what every woman dreams of: track down the five men who'd broken her heart and find out what really went wrong. Between the ages of thirteen and thirty-five, Susan had plunged into love, heart-first, five times. One bad breakup was more hurtful and humiliating than the next.

With insight and daring, Susan chronicles her six-month-long journey back down a road strewn with romantic regret. Although for years she'd blamed her boyfriends for their flagrant infidelity, ludicrous faults, and immature foibles, to her shock she can now suddenly pinpoint the exact moment where she herself screwed up each relationship.

A successful freelance writer living in Manhattan, Susan Shapiro was in the midst of a midlife crisis she called her "no-book-no-baby summer." Married for five years to Aaron, a workaholic TV comedy writer always on the road, she was beginning to wonder if she'd remain book- and babyless forever. Then the phone rang, and it was Brad, a college flame who'd become a Harvard scientist with a book coming out. Susan offers to interview him, and she winds up launching into all the intense, invasive questions she'd always wanted to ask him. To her surprise, he answers them! This ignites a spark that sends her on a cross-country jaunt back through her lust-littered past.

While Brad is still single, she finds that Heartbreaks Number Two, Three, and Four are not. George, a theater professor, and Richard, a music biographer, are happily married with children. Tom, a handsome blond lawyer in L.A., is getting divorced. Just as it's becoming easy to worm her way back into her exes' good graces, she crashes head-on with David, a wry Canadian root canal specialist. ("It's the equivalent of what you did to me emotionally," she tells him.) She then gut-wrenchingly relives the agony of splitting up with her first love all over again. Yet somewhere between the tantalizing what-ifs and bittersweet might-have-beens, she finds what she's been searching for all along.

Part relationship manifesto, part confessional, and part valentine to the males in her life she adores, Five Men Who Broke My Heart is for anyone who has ever wondered what became of their first love. Or second, third, fourth, or fifth…

Susan Shapiro, an award-winning writing professor, freelances for The New York Times, New York magazine, The Wall Street Journal, Los Angeles Times, Elle, and O: The Oprah Magazine online. She's the bestselling author or co-author of twelve books her family hates, including Five Men Who Broke My Heart, Lighting Up, Unhooked, The Bosnia List, and the inspiring writing guide The Byline Bible. She and her husband, a scriptwriter, live in Greenwich Village, where she teaches her popular "instant gratification takes too long" classes at The New School and NYU and in private workshops and seminars.