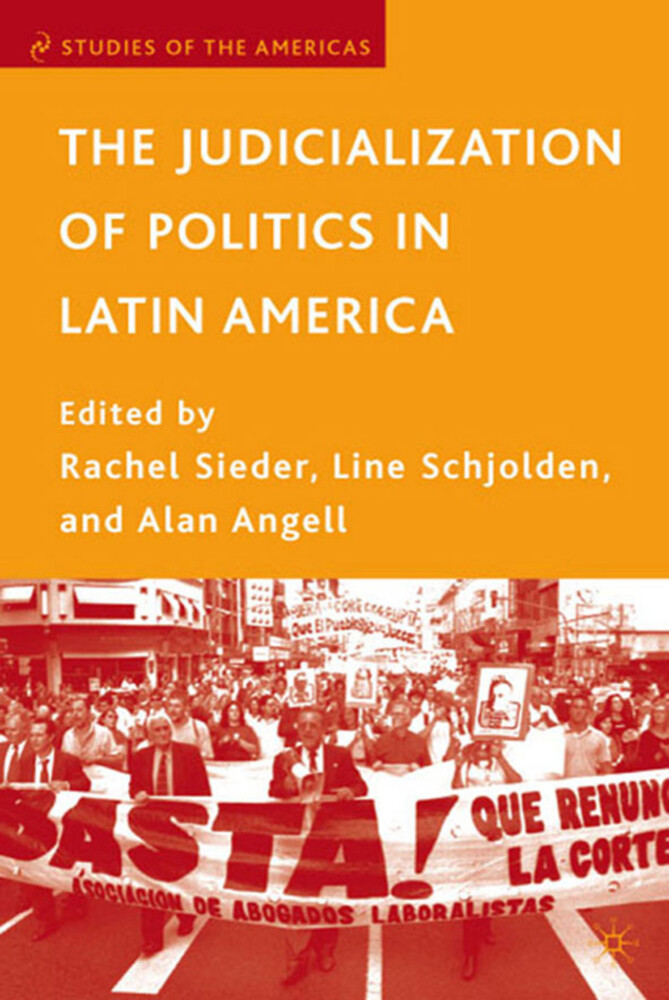 The Judicialization of Politics in Latin America

Auflage 2005. Sprache: Englisch.
Taschenbuch
During the last two decades the judiciary has come to play an increasingly important political role in Latin America. Constitutional courts and supreme courts are more active in counterbalancing executive and legislative power than ever before. At th … weiterlesen
Geschenk per Mail versenden
Taschenbuch

Titel: The Judicialization of Politics in Latin America

During the last two decades the judiciary has come to play an increasingly important political role in Latin America. Constitutional courts and supreme courts are more active in counterbalancing executive and legislative power than ever before. At the same time, the lack of effective citizenship rights has prompted ordinary people to press their claims and secure their rights through the courts. This collection of essays analyzes the diverse manifestations of the judicialization of politics in contemporary Latin America, assessing their positive and negative consequences for state-society relations, the rule of law, and democratic governance in the region. With individual chapters exploring Argentina, Brazil, Chile, Colombia, Costa Rica, Mexico, Peru and Venezuela, it advances a comparative framework for thinking about the nature of the judicialization of politics within contemporary Latin American democracies.

RACHEL SIEDER is Senior Lecturer in Politics at the Institute for the Study of the Americas, School of Advanced Studies, University of London. Sieder has published articles in numerous journals, including Democratization, The Bulletin of Latin American Research, and Citizenship Studies. Her most recent volume (ed.) is Multiculturalism in Latin America: Indigenous Rights, Diversity and Democracy (2002). She is editor of the Journal of Latin American Studies. LINE SCHJOLDEN is currently Assistant Professor of Latin American History and Culture at the University of Bergen, Norway. She was previously Hewlett Postdoctoral Research Fellow in Latin American Law and Politics at the Institute for the Study of the Americas, University of London and the Latin American Centre, St. Antony's College, University of Oxford. She holds a PhD in History from the University of California, Berkeley. Her research is in the field of legal and labour history in early twentieth-century Argentina. ALAN ANGELL was Director of the Latin American Centre, St Antony's College, Oxford, Lecturer in Latin American Politics, and a Fellow of St Antony's College. He has published Politics and the Labour Movement in Chile (1972); En Busca de la Utopia: La Politica Chilena entre Alessandri y Pinochet (1994); and edited with Dr. Benny Pollack, The Legacy of Dictatorship: Political, Economic and Social Change in Pinochet's Chile (1993). His most recent research was conducted jointly with Rosemary Thorp and Pamela Lowden and published as Decentralising Development: The Political Economy of Institutional Change in Colombia and Chile (OUP 2001).

'This exceptional volume does a splendid job of illuminating the myriad dimensions of the judicialization of politics in Latin America. No phenomenon is more central to understanding recent trends in democratic governance throughout the region. The first-rate authors treat the subject from diverse perspectives, with impressive conceptual sophistication, rigor, and sensitivity to national variations. The result is a thoroughly original and stimulating contribution that fills an important gap in the literature and that will doubtless be of keen interest to academics, policy makers and advocates alike.' - Michael Shifter, Vice President for Policy, Inter-American Dialogue
'This book eloquently maps the judicialization of politics in contemporary Latin America and its consequences. It weaves politics, law and society together into a rich and sophisticated analysis of the inter-relationship between judicialization and Latin American democracy in the 1990s and 2000s. Its comparative framework makes a valuable contribution to our understanding of how judicialization enables and constrains democratization and the search for justice. This is an impressive and original work that fills an important gap in the literature.' - David Sugarman, Professor at Law School, Lancaster University, UK
'This book is essential reading to understand the important new trend of judicial activism in Latin America. Does it strengthen democracy by enhancing individual rights, the rule of law, the propriety of the exercise of power, and electoral fairness? Or as part of a 'judicialization of politics', is it the expression of an unwarranted instrumentalization of the judiciary by powerful actors as well as an extension of judicial authority over domains best left to political negotiations in governmental and legislative arenas? Does it, then, undermine rather than contribute to deepening the quality of democracy? In a set of highly nuanced analysis the authors provide evidence for all these assessments.' - J. Samuel Valenzuela, Kellogg Institute
'The book should be of interest to policy-makers and practitioners alike. Political scientists and legal scholars will all find food for thought and directions for future research. Its mixture of US, European and Latin American perspectives and forthcoming translation into Spanish also make this one of those rare works which promises to provoke and sustain genuine exchange and dialogue'. - Cath Collins, International Affairs
'All the chapters are written by experts in the field and are of high quality, combining a precise analysis of each specific case with reflection on the factors driving judicialisation, its potential and the risks it presents for democracy...This volume opens important avenues for a rigorous analysis of judicialisation in Latin America and covers a broad range of themes and countries.' - Rodrigo Uprimny, Latin American Studies