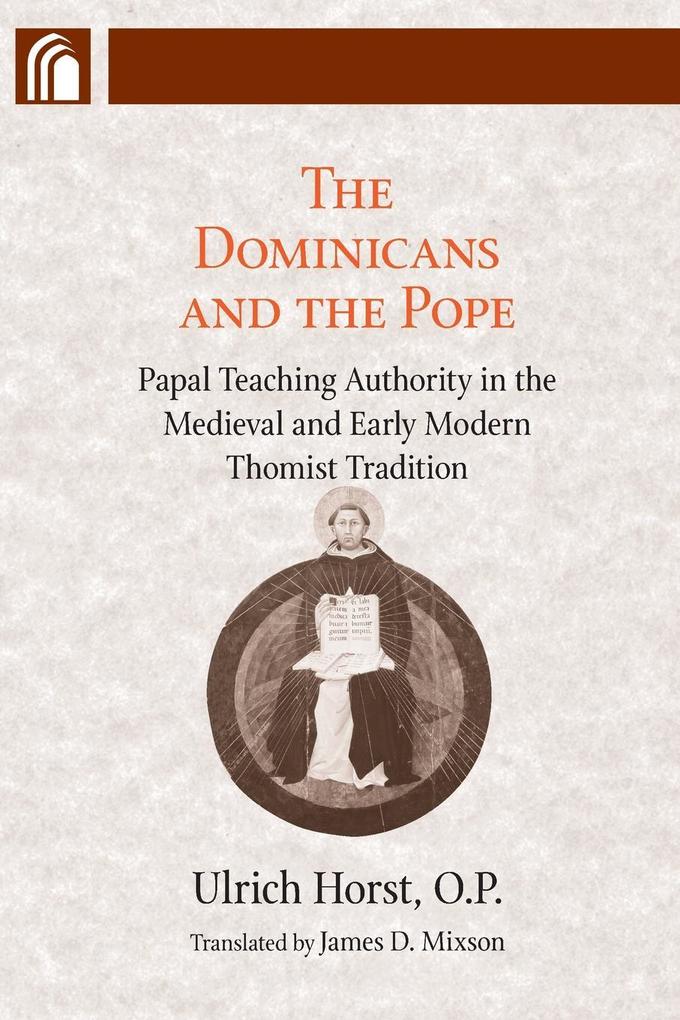 Dominicans and the Pope

von Ulrich Horst
Papal Teaching Authority in the Medieval and Early Modern Thomist Tradition. Paperback. Sprache: Englisch.
Taschenbuch
"Based on a lifetime of research and writing, these three lectures of Father Ulrich Horst, O.P., provide a masterful overview with copious references of the predominant, official, and evolving positions of the Dominicans on the teaching authority of … weiterlesen
Geschenk per Mail versenden
Taschenbuch

"Based on a lifetime of research and writing, these three lectures of Father Ulrich Horst, O.P., provide a masterful overview with copious references of the predominant, official, and evolving positions of the Dominicans on the teaching authority of the pope. While always supportive of the jurisdictional primacy of the papacy upon which their own faculties to preach, teach, and render pastoral care depended, Dominican theologians beginning with Thomas Aquinas initially held that the Roman Church, rather than the pope personally, was infallible. Only in the sixteenth century with the need for prompt and certain responses to the Protestant challenge did some members of the Dominican School of Salamanca (Melchior Cano, Juan de la Peña, Domingo Báñez, etc.) teach that the pope cannot err. The Jesuits (Gregorio de Valencia, Robert Bellarmine, etc.) adopted and expanded on this teaching which triumphed at Vatican I despite the efforts of Dominican cardinal Filippo Maria Guidi to defend the earlier Dominican position that the pope must first properly consult before defining. Father Horst has thus demonstrated how nuanced, varied, and slowly evolving was the teaching of the Dominicans on papal authority." -Nelson H. Minnich, The Catholic University of America
In The Dominicans and the Pope, Ulrich Horst reviews the long tradition within the Dominican order of commenting on the teaching authority of the pope and the role of conciliar authority. Horst succinctly shows the differences within the order on the topic and makes clear how Dominicans tended to differ on the matter from theologians of other orders such as the Franciscans and, later, the Jesuits, whose views would eventually lead to the proclamation on infallibility at Vatican I. Despite his distinguished career as a medievalist and authority on ecclesiology, little of Horst's scholarly corpus has been translated into English. These lectures, then, mark an introduction of this formidable scholar to a wider audience.

ULRICH HORST, O.P., is emeritus senior professor and director of the Grabmann Institute at the University of Munich. He is the author of a number of books, including Papst, Konzil, Unfehlbarkeit and Unfehlbarkeit und Geschichte.