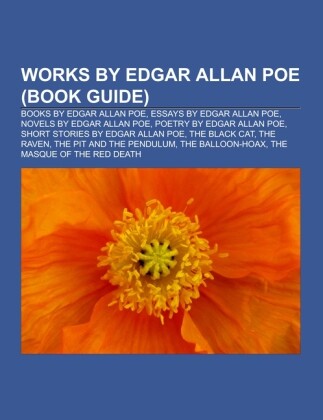 Source: Wikipedia. Commentary (works not included). Pages: 94. Chapters: Books by Edgar Allan Poe, Essays by Edgar Allan Poe, Novels by Edgar Allan Poe, Poetry by Edgar Allan Poe, Short stories by Edgar Allan Poe, The Black Cat, The Raven, The Pit and the Pendulum, The Balloon-Hoax, The Masque of the Red Death, The Devil in the Belfry, The Murders in the Rue Morgue, A Descent into the Maelström, The Purloined Letter, The Narrative of Arthur Gordon Pym of Nantucket, Poems by Edgar Allan Poe, Eureka: A Prose Poem, Al Aaraaf, The Gold-Bug, The Fall of the House of Usher, Tamerlane and Other Poems, Metzengerstein, The Tell-Tale Heart, Ulalume, The Cask of Amontillado, MS. Found in a Bottle, The Facts in the Case of M. Valdemar, Ligeia, The Conchologist's First Book, Berenice, Politian, Bon-Bon, Annabel Lee, Hop-Frog, William Wilson, Some Words with a Mummy, The Man of the Crowd, The Mystery of Marie Rogêt, A Tale of the Ragged Mountains, Eleonora, Thou Art the Man, The Imp of the Perverse, The Man That Was Used Up, The Business Man, The System of Doctor Tarr and Professor Fether, The Philosophy of Composition, Tales of the Grotesque and Arabesque, The Premature Burial, The Bells, The Oblong Box, Never Bet the Devil Your Head, The Conqueror Worm, The City in the Sea, Tales of Mystery & Imagination, Morella, The Oval Portrait, The Philosophy of Furniture, A Predicament, The Spectacles, Maelzel's Chess Player, The Light-House, The Angel of the Odd, Lenore, The Haunted Palace, Eldorado, To Helen, The Unparalleled Adventure of One Hans Pfaall, Eulalie, A Dream Within a Dream, The Journal of Julius Rodman, The Poetic Principle, The Conversation of Eiros and Charmion, Morning on the Wissahiccon, Nesace, Sonnet to Science. Excerpt: The Narrative of Arthur Gordon Pym of Nantucket (1838) is the only complete novel written by American writer Edgar Allan Poe. The work relates the tale of the young Arthur Gordon Pym, who stows away aboard a whaling ship called the Grampus. Various adventures and misadventures befall Pym, including shipwreck, mutiny, and cannibalism, before he is saved by the crew of the Jane Guy. Aboard this vessel, Pym and a sailor named Dirk Peters continue their adventures further south. Docking on land, they encounter hostile black-skinned natives before escaping back to the ocean. The novel ends abruptly as Pym and Peters continue towards the South Pole. The story starts out as a fairly conventional adventure at sea, but it becomes increasingly strange and hard to classify. Poe, who intended to present a realistic story, was inspired by several real-life accounts of sea voyages, and drew heavily from Jeremiah N. Reynolds and referenced the Hollow Earth theory. He also drew from his own experiences at sea. Analyses of the novel often focus on the potential autobiographical elements as well as hints of racism and the symbolism in the final lines of the work. Difficulty in finding literary success early in his short story-writing career inspired Poe to pursue writing a longer work. A few serialized installments of The Narrative of Arthur Gordon Pym of Nantucket were first published in the Southern Literary Messenger, though never completed. The full novel was published in July 1838 in two volumes. Some critics responded negatively to the work for being too gruesome and for cribbing heavily from other works, while others praised its exciting adventures. Poe himself later called it "a very silly book". Nevertheless, The Narrative of Art...
Kunden, die diesen Artikel gekauft haben, kauften auch
Schreiben Sie eine Rezension