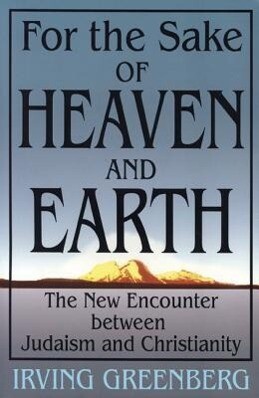 For the Sake of Heaven and Earth: The New Encounter Between Judaism and Christianity

von Yitz Greenberg
Sprache: Englisch.
Taschenbuch
Rabbi Greenberg's new book makes an invaluable contribution to interfaith conversation. He calls for Christians and Jews to come together in their continuously evolving partnership with God -- dual covenants that demand "openness to each other, learn … weiterlesen
Geschenk per Mail versenden
Taschenbuch

Titel: For the Sake of Heaven and Earth: The New Encounter Between Judaism and Christianity
Autor/en: Yitz Greenberg

Rabbi Greenberg's new book makes an invaluable contribution to interfaith conversation. He calls for Christians and Jews to come together in their continuously evolving partnership with God -- dual covenants that demand "openness to each other, learning from each other, and a respect for the distinctiveness of the ongoing validity of each other." Now, when the resurgence of anti-Semitism poses a threat to Jews here and around the world, this powerful book presents a new opportunity to heed the call first put forward by Rabbi Greenberg nearly four decades ago: a call for people of all faiths and cultures to work together to create a world in which everyone can live with dignity and equality -- the deserved inheritance of a humanity created in the image of God. In the first half of his book, Rabbi Greenberg takes us on his personal journey to a rethinking of Christianity, which ultimately gave rise to his belief that Christianity, Judaism (and every religion that works to repair the world and advance the triumph of life) are valid expressions of the pact between God and humankind. In Part 2 he brings together for the first time his seven most important essays on the new encounters between Judaism and Christianity. Ideal for study groups and course adoption, the book contains a study guide as well as endnotes, an index, and thought-provoking responsive essays by leading Catholic, Protestant, and Jewish commentators, including James Carroll, Krister Stendahl, and Michael Novak. Readers, students, and scholars of Judaism, Christianity, and comparative religions will find this to be one of the most important books of our time on the ChristianJewish relationship.

"[A] spiritual and intellectual autobiography... At an important moment like this not only in Jewish-Christian relations but also in confrontations among all world religions, his approach deserves to be widely read - and debated."-New York Times "Emotionally powerful and lyrically written."-Baltimore Jewish Times "A dramatic intellectual autobiography and a deeply stimulating theological tour de force. But most of all, it is a work of religious intensity."-Eugene Korn for Jewish Week "Some religious knowledge is useful for grasping the complex ideas, but the effort required to understand Greenberg"s theological conceptions will be richly rewarded, since he provides vital insights."-Publishers Weekly (starred review) "Simply the most stimulating, thought-provoking, and theologically challenging book I have read."-Jewish Book World "The author makes a significant contribution to authentic inter-religious dialogue... This book I place on the shelf in my library that is most easily accessible. I know I will consult it often, for God"s sake and my own."-Sh"ma

Schreiben Sie eine Bewertung für: For the Sake of Heaven and Earth: The New Encounter Between Judaism and Christianity