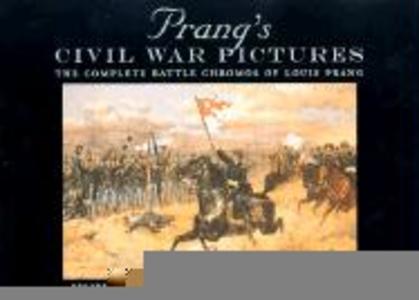 During the 1880s, a German-born, Boston-based picture publisher successfully commissioned the most ambitious series of battle prints ever published. Louis Prang, best known as the "father of the Christmas card", hired noted military and marine artists to create original scenes of combat, and then reproduced their works in a wildly popular portfolio of chromolithographs. He called the set Prang's War Pictures.They were offered to an eager public accompanied by "descriptive texts" that told the story of each engagement through eyewitness recollection by the heroes of each action. The set proved both appealing and influential, selling vigorously in various editions for a generation, and elevating the stature of military illustration in America. For 20 years, Civil War prints for the masses had featured uninspired, one-dimensional views of armies in hand-to-hand combat. Prang and his artists demonstrated genuine skill and imaginative perspective. They showed both real carnage and important technological advances, revealing both the broad sweep of panoramic battlefields and the intimate action of individual combatants.These famously sepia-toned chromos went on to become familiar illustrations in books and magazines -- often offered as definitive examples of Civil War art. But until now, the complete set of 18 chromos has never been collected in a single volume. And the original "Descriptive Texts" first offered Prang's customers as marketing brochures to boost sales -- a priceless historical archive in and of themselves -- have never been published since, anywhere. Holzer reunites pictures and texts in an authoritative, milestone volume orchestrating prints and descriptions thatresurrect Prang's original conception of battle art for the masses for a new generation.The book also features reproductions of the original works of art that inspired the prints, created on commission by battle painter Thure de Thulstrup and naval specialist Julian Oliver Dav

Harold Holzer is Vice-President for Communications at The Metropolitian Museum of Art, and has authored, co-authored and edited 16 books, including The Union Preserved.

"This splendid volume should stand as the definitive treatment of Prang and his work." - Gary W. Gallagher, Professor of History at the University of Virginia and author of Lee and His Generals in War and Memory "Prang's Civil War Pictures proves yet again that the editor is the foremost expert on the iconography of America's Middle Period. Holzer is witty and perceptive when he shares with us the talent of Louis Prang whose Civil War 'pictures' made him a household name. Beautifully illustrated, this book will captivate anyone interested in the Civil War or nineteenth century art." - Chief Justice Frank J. Williams, Chair, The Lincoln Forum

Buch (gebunden)
Yours for the Union
von Bonnie B. Collie…