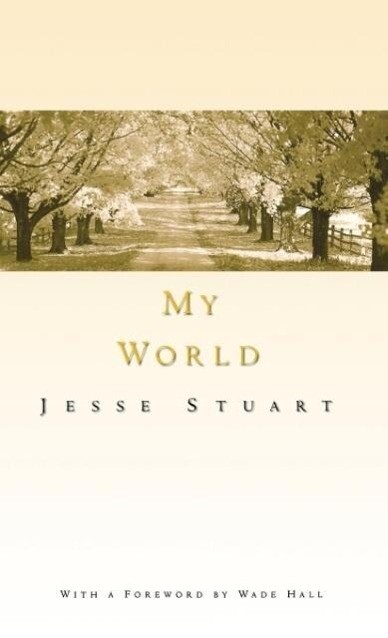 A personalized travelogue, My World chronicles the inspiring story of a poor Kentucky boy who learned how to turn the rough grist of his life into the fine art of literature.

The University Press of Kentucky

With a Foreword by Wade Hall

A personalized travelogue, My World chronicles the inspiring story of a poor Kentucky boy who learned how to turn the rough grist of his life into the fine art of literature.

Jesse Stuart's life centered on W-Hollow, Greenup County, Kentucky, and extended to the far corners of the world. As a writer, teacher, and lecturer, he traveled to all but one of the United States and to ninety countries on six continents. As the core of Stuart's world, W-Hollow was the place of his birth and his first reaching out-to the brown earth and the green shoots growing out of it, to the insects and animals that inhabited its wooded slopes, to the blue sky and the birds that flashed across it. From W-Hollow he went out first to Greenup High School, then to Lincoln Memorial University, then to all of Kentucky, and finally to the world.

In My World, we see Stuart's expanding universe through his eyes. Through the telescoping essays, Stuart slowly extends his vision to encompass more of the world and humanity. He is conscious of the social and geographical forces that shaped and defined his life. He is also very aware of the forces that draw him home again. He saw his beloved Kentucky as many states in one. Each region-from the east Kentucky mountains to the Jackson Purchase-was a unique kingdom. Stuart brings Kentucky's varied scenery, its people, and their distinctive dialects and social customs to life for his readers.

Jesse Stuart is a Kentucky teacher, lecturer, and writer. As a specialist for the U.S. Department of State, he traveled around the world, and he served as a visiting lecturer and professor at the American University in Cairo in 1960-61. His work includes nearly thirty books, ranging from poetry to biography, autobiography, novels, and short stories.