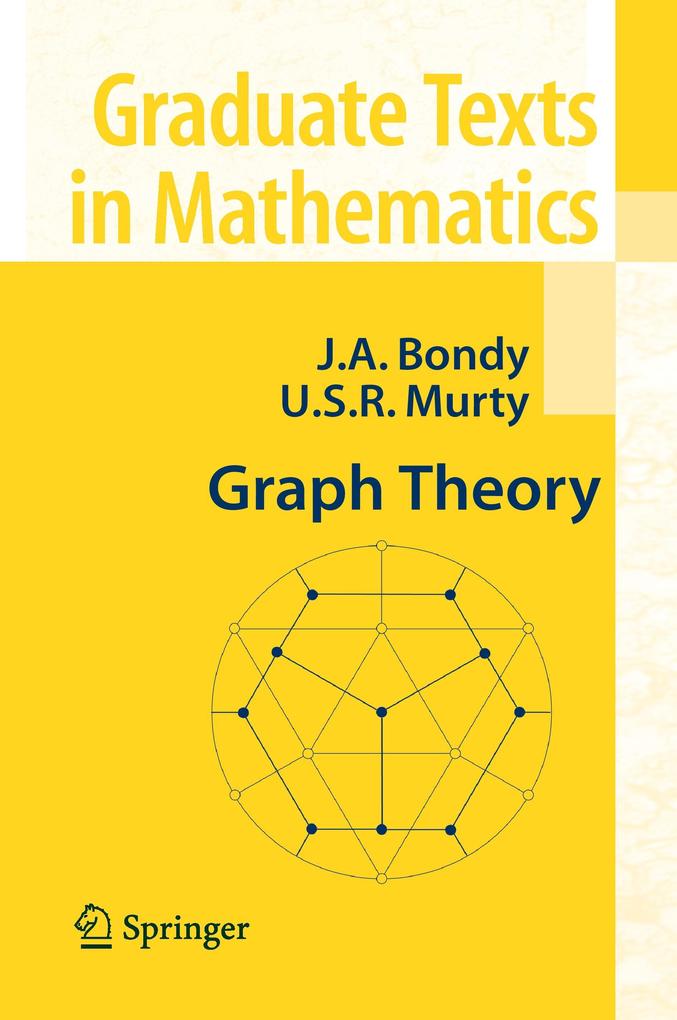 The primary aim of this book is to present a coherent introduction to graph theory, suitable as a textbook for advanced undergraduate and beginning graduate students in mathematics and computer science. It provides a systematic treatment of the theory of graphs without sacrificing its intuitive and aesthetic appeal. Commonly used proof techniques are described and illustrated. The book also serves as an introduction to research in graph theory.

From the reviews:
For more than three decades, the authors' Graph Theory with Applications (1976) has served as perhaps the classic introduction to graph theory. With happy shock, the reader learns that Bondy and Murty have updated the book, doubling its size. Three decades would count as a long time in the life of any active scientific pursuit, but the original year of publication saw the solution to the four-color conjecture that catalyzed a vast revitalization of graph theory. Graph theory, moreover, now has intimate interactions with computer science, practical and theoretical: three decades ago, computer networks barely existed and the founding papers of complexity theory had just appeared. Connections between graph theory and probability have also undergone a revolution. In short, the passage of time has transformed this subject in these and other ways, and the authors have transformed their book accordingly. They do, by choice, largely omit the theory of graph minors (developed by Paul Seymour and Neil Robertson and followers), which certainly now deserves a monographic treatment of its own. Summing up: Recommended. Lower-division undergraduate through professional collections.
CHOICE
This book is a follow-on to the authors' 1976 text, Graphs with Applications. What began as a revision has evolved into a modern, first-class, graduate-level textbook reflecting changes in the discipline over the past thirty years... This text hits the mark by appearing in Springer's Graduate Texts in Mathematics series, as it is a very rigorous treatment, compactly presented, with an assumption of a very complete undergraduate preparation in all of the standard topics. While the book could ably serve as a reference for many of the most important topics in graph theory, it fulfills the promise of being an effective textbook. The plentiful exercises in each subsection are divided into two groups, with the second group deemed "more challenging". Any exercises necessary for a complete understanding of the text have also been marked as such. There is plenty here to keep a graduate student busy, and any student would learn much in tackling a selection of the exercises... Not only is the content of this book exceptional, so too is its production. The high quality of its manufacture, the crisp and detailed illustrations, and the uncluttered design complement the attention to the typography and layout. Even in simple black and white with line art, it is a beautiful book.
SIAM Book Reviews
"A text which is designed to be usable both for a basic graph theory course ... but also to be usable as an introduction to research in graph theory, by including more advanced topics in each chapter. There are a large number of exercises in the book ... . The text contains drawings of many standard interesting graphs, which are listed at the end." (David B. Penman, Zentralblatt MATH, Vol. 1134 (12), 2008)
MathSciNet Reviews
"The present volume is intended to serve as a text for "advanced undergraduate and beginning graduate students in mathematics and computer science" (p. viii). It is well suited for this purpose. The writing is fully accessible to the stated groups of students, and indeed is not merely readable but is engaging... Even a complete listing of the chapters does not fully convey the breadth of this book... For researchers in graph theory, this book offers features which parallel the first Bondy and Murty book: it provides well-chosen terminology and notation, a multitude of especially interesting graphs, and a substantial unsolved problems section...One-hundred unsolved problems are listed in Appendix A, a treasure trove of problems worthy of study... (In short) this rewrite of a classic in graph theory stands a good chance of becoming a classic itself."
"The present volume is intended to serve as a text for 'advanced undergraduate and beginning graduate students in mathematics and computer science' ... . The writing is fully accessible to the stated groups of students, and indeed is not merely readable but is engaging. The book has many exercise sets, each containing problems ... ." (Arthur M. Hobbs, Mathematical Reviews, Issue 2009 C)
"A couple of fantastic features: Proof techniques: I love these nutshelled essences highlighted in bordered frames. They look like pictures on the wall and grab the view of the reader. Exercises: Their style, depth and logic remind me of Lovász' classical exercise book. Also the fact that the name of the author is bracketed after the exercise...Figures: Extremely precise and high-tech...The book contains very recent results and ideas. It is clearly an up-to-date collection of fundamental results of graph theory...All-in-all, it is a marvelous book." (János Barát, Acta Scientiarum Mathematicarum, Vol. 75, 2009)