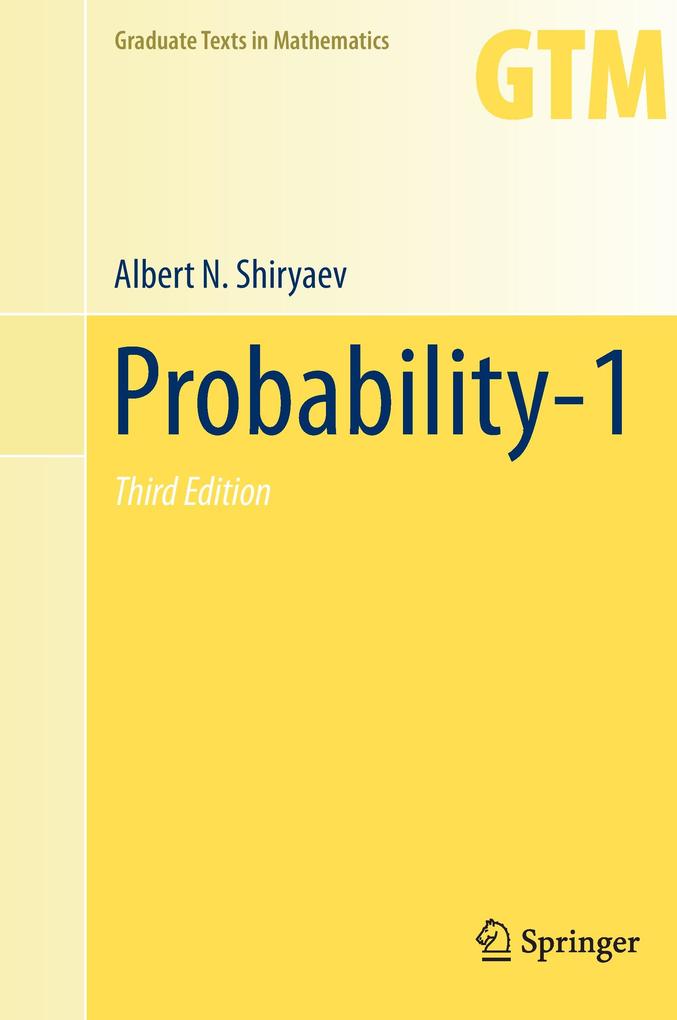 Advanced maths students have been waiting for this, the third edition of a text that deals with one of the fundamentals of their field. This book contains a systematic treatment of probability from the ground up, starting with intuitive ideas and gradually developing more sophisticated subjects, such as random walks and the Kalman-Bucy filter. Examples are discussed in detail, and there are a large number of exercises. This third edition contains new problems and exercises, new proofs, expanded material on financial mathematics, financial engineering, and mathematical statistics, and a final chapter on the history of probability theory.

Albert N. Shiryaev is Chief Scientific Researcher and Professor of Probability Theory and Mathematical Statistics at the Steklov Mathematical Institute of the Russian Academy of Sciences and Head of the Department of Probability Theory in the Mechanics and Mathematics Faculty at Lomonosov Moscow State University. He is the author of several books, including Problems in Probability [translated by Andrew Lyasov], Optimal Stopping Rules [translated by A.B. Aries], and Statistics of Random Processes [with Robert S. Liptser]. He was the recipient of the A.N. Kolmogorov Prize of the Russian Academy of Sciences in 1994 and the A.A. Markov Prize in 1974.

Dmitry M. Chibisov is Leading Scientific Researcher and Professor of Probability Theory and Mathematical Statistics at the Steklov Mathematical Institute of the Russian Academy of Sciences. He is the Editor-in-Chief of the journal Mathematical Methods of Statistics.

"This book is axiomatic and abstract, and presents a comprehensive but pure-math approach to probability theory. ... There are good exercises throughout the book ... . I think this is a good book if you like this kind of very abstract approach." (Allen Stenger, MAA Reviews, August, 2017)

"This book provides a general introduction to probability theory, and covers several advanced topics. ... Numerous examples and problems help the reader to understand the topics. The book is recommended to master and PhD students in mathematics." (László Viharos, Acta Scientiarum Mathematicarum, Vol. 83 (1-2), 2017)

It is clear that this book contains important and interesting results obtained through a long time period, beginning with the classical Bernoulli's law of large numbers, and ending with very recent results concerning convergence of martingales and absolute continuity of probability measures. Let us note especially that the great number of ideas, notions and statements in the book are well-motivated, explained in detail and illustrated by suitably chosen examples and a large number of exercises. Thus, the present book is a synthesis of all significant classical ideas and results, and many of the major achievements of modern probability theory. In the whole it is a welcome addition to mathematical literature and can become an indispensable textbook for courses in stochastics.