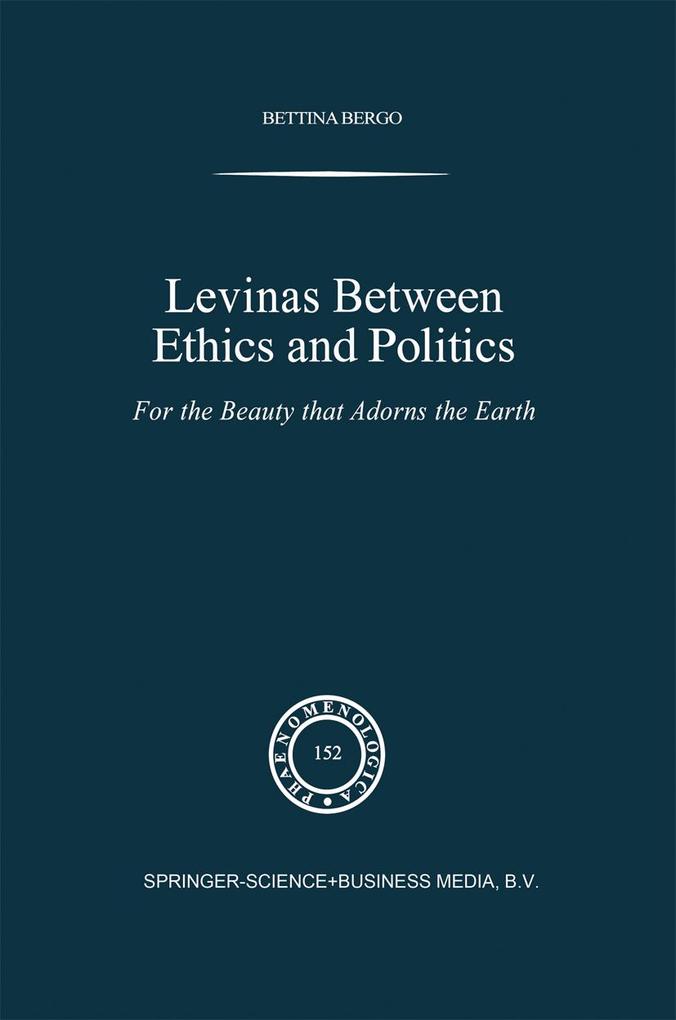 Levinas Between Ethics and Politics: For the Beauty That Adorns the Earth

von B.G. Bergo
For the Beauty that Adorns the Earth. Auflage 1999. Sprache: Englisch.
Buch (gebunden)
The act of thought-thought as an act-would precede the thought thinking or becoming conscious of an act. The notion of act involves a violence essentially: the violence of transitivity, lacking in the transcendence of thought. . . Totality and Infini … weiterlesen
Geschenk per Mail versenden
Buch (gebunden)

Titel: Levinas Between Ethics and Politics: For the Beauty That Adorns the Earth
Autor/en: B.G. Bergo

For the Beauty that Adorns the Earth.
Auflage 1999.
Sprache: Englisch.

The act of thought-thought as an act-would precede the thought thinking or becoming conscious of an act. The notion of act involves a violence essentially: the violence of transitivity, lacking in the transcendence of thought. . . Totality and Infinity The work of Emmanuel Levinas revolves around two preoccupations. First, his philosophical project can be described as the construction of a formal ethics, grounded upon the transcendence of the other human being and a subject's spontaneous responsibility toward that other. Second, Levinas has written extensively on, and as a member of, the cultural and textual life of Judaism. These two concerns are intertwined. Their relation, however, is one of considerable complexity. Levinas' philosophical project stems directly from his situation as a Jewish thinker in the twentieth century and takes its particular form from his study of the Torah and the Talmud. It is, indeed, a hermeneutics of biblical experience. If inspired by Judaism, Levinas' ethics are not eo ipso confessional. What his ethics takes from Judaism, rather, is a particular way of conceiving transcendence and the other human being. It owes to the philosophy of Franz Rosenzweig and Martin Buber a logos of the world and of the holy, which acknowledges their incom mensurability without positing one as fallen and the other as supernal.

Introduction. Part One: Presentation and Analysis of the Philosophy of Emmanuel Levinas. I. The Significance and Evolution of the Philosophy of Levinas. II. Levinas' Ethical Metaphysics. III. Levels of Being in Totality and Infinity. IV Intersubjectivity in Totality and Infinity. V. Election from `Beyond the Face' in Totality and Infinity: Intersubjectivity Grounded in a Figurative Biology. VI. The Passage from Totality and Infinity to Otherwise than Being or Beyond Essence via Prophetism and Messianic Consciousness. VII. Subjectivity and Messianic Consciousness. VIII. Prophetism: From the Saying to the Said, or the Passage From Ethical Responsibility to Sociality. Part Two: Between Responsibility and Justice: A Criticism of the Passage From Ethics to Politics. IX. Ethics as First Philosophy and the Question of Its Universalization. X. The Universalization of Responsibility as a Passage from Ethics to a Politics of Questioning: Simon Critchley's Reading of Levinas. XI. Gillian Rose's Critique of Prophetism and Politics in Levinas. XII. The Unhappy Consciousness and Levinas' Ethics. Concluding Remarks. Selected Bibliography. Index.

`Bergo's work is not for novices. However, those familiar with Levinas's thought are likely to find it an astonishingly erudite, even indispensable, reading of his major works as well as a subtle, cogently argued interpretation of the ambiguities, rifts and paradoxes inherent in the relation of ethics to polity.'
The Journal of Speculative Philosophy, 15:1 (2001)

Buch (gebunden)
The World We Live In
von Alexandru Dragom…

Schreiben Sie eine Bewertung für: Levinas Between Ethics and Politics: For the Beauty That Adorns the Earth