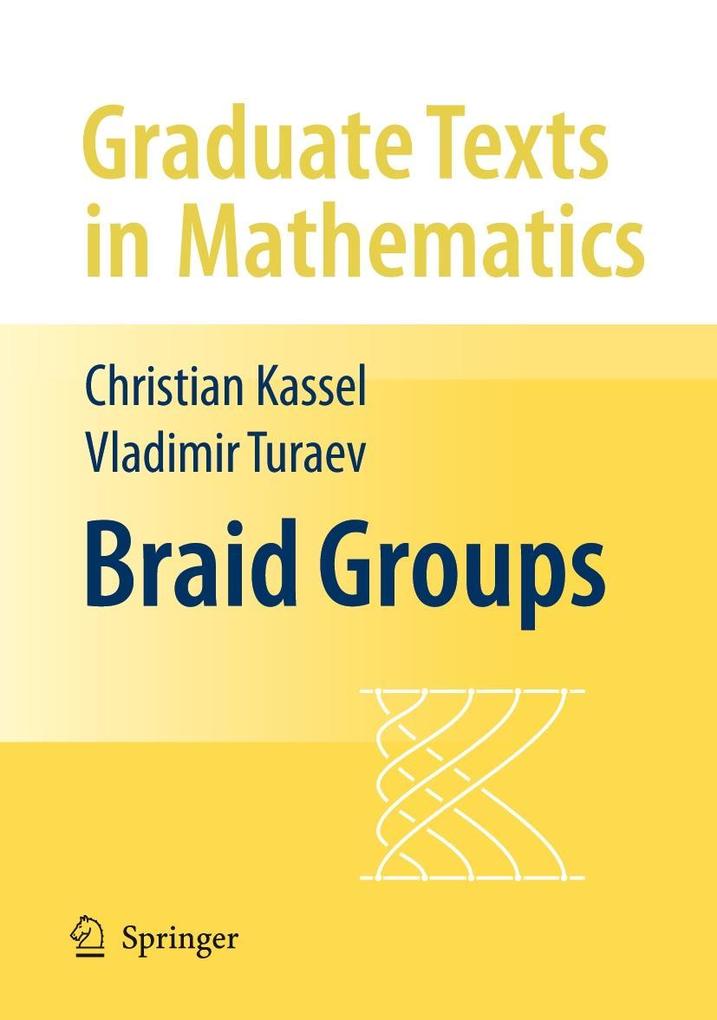 Braids and braid groups have been at the heart of mathematical development over the last two decades. Braids play an important role in diverse areas of mathematics and theoretical physics. The special beauty of the theory of braids stems from their attractive geometric nature and their close relations to other fundamental geometric objects, such as knots, links, mapping class groups of surfaces, and configuration spaces.
In this presentation the authors thoroughly examine various aspects of the theory of braids, starting from basic definitions and then moving to more recent results. The advanced topics cover the Burau and the Lawrence--Krammer--Bigelow representations of the braid groups, the Alexander--Conway and Jones link polynomials, connections with the representation theory of the Iwahori--Hecke algebras, and the Garside structure and orderability of the braid groups.
This book will serve graduate students, mathematicians, and theoretical physicists interested in low-dimensional topology and its connections with representation theory. In this well-written presentation, motivated by numerous examples and problems, the authors introduce the basic theory of braid groups, highlighting several definitions that show their equivalence; this is followed by a treatment of the relationship between braids, knots and links. Important results then treat the linearity and orderability of the subject. Relevant additional material is included in five large appendices.
Braid Groups will serve graduate students and a number of mathematicians coming from diverse disciplines.

Dr. Christian Kassel is the director of CNRS (Centre National de la Recherche Scientifique in France), was the director of l'Institut de Recherche Mathematique Avancee from 2000 to 2004, and is an editor for the Journal of Pure and Applied Algebra. Kassel has numerous publications, including the book Quantum Groups in the Springer Gradate Texts in Mathematics series.Dr. Vladimir Turaev was also a professor at the CNRS and is currently at Indiana University in the Department of Mathematics.

"Details on ... braid groups are carefully provided by Kassel and Turaev's text Braid Groups. ... Braid Groups is very well written. The proofs are detailed, clear, and complete. ... The text is to be praised for its level of detail. ... For people ... who want to understand current research in braid group related areas, Braid Groups is an excellent, in fact indispensable, text." (Scott Taylor, The Mathematical Association of America, October, 2008)

"This is a very useful, carefully written book that will bring the reader up to date with some of the recent important advances in the study of the braid groups and their generalizations. It continues the tradition of these high quality graduate texts in mathematics. The book could easily be used as a text for a year course on braid groups for graduate students, one advantage being that the chapters are largely independent of each other." (Stephen P. Humphries, Mathematical Reviews, Issue 2009 e)

"This book is a comprehensive introduction to the theory of braid groups. Assuming only a basic knowledge of topology and algebra, it is intended mainly for graduate and postdoctoral students." (Hirokazu Nishimura, Zentralblatt MATH, Vol. 1208, 2011)

"The book of Kassel and Turaev is a textbook ... for graduate students and researchers. As such, it covers the basic material on braids, knots, and links ... at a level which requires minimal background, yet moves rapidly to non-trivial topics. ... It is a carefully planned and well-written book; the authors are true experts, and it fills a gap. ... it will have many readers." (Joan S. Birman, Bulletin of the American Mathematical Society, Vol. 48 (1), January, 2011)