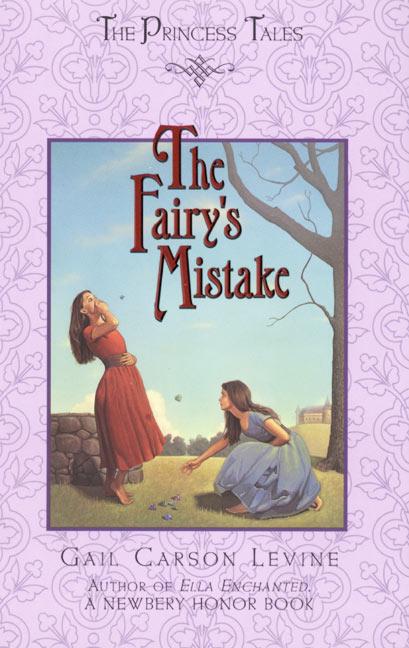 Gail Carson Levine charmed the world with Ella Enchanted, her spirited retelling of the Cinderella story. Now this award-winning author turns her attention to two more classic fairy tales, and deftly turns them upside down and inside out with her trademark wit and hilarity.In The Fairy's Mistake, two very different sisters have two very different encounters with the fairy Ethelinda. Rosella is kind and helpful. Her reward: Jewels and gems tumble out of her mouth whenever she speaks. Myrtle is rude and spiteful. Her punishment: Bugs and vipers slither out of her mouth. The fairy Ethelinda feels she's meted out justice just right--until she discovers Rosella has been locked up by a greedy prince and Myrtle is having the time of her life! In The Princess Test, King Humphrey has decided it's time for his son, Prince Nicholas, to marry. But he must make sure the bride is a real princess. So he devises a series of princess tests, designed to weed out the phonies and the fakes. Meanwhile, Nicholas has fallen in love with Lorelei, a mere blacksmith's daughter. She's no princess, but he wants to marry her all the same--but how will she ever pass the terrible tests?In these first two delightfully entertaining, laugh-out-loud Princess Tales, Gail Levine gently spoofs the notion that fairies are always right and that tests can ever prove a person's worth, but holds fast to the notion that true love will always win in the end.

Gail Carson Levine's first book for children, Ella Enchanted, was a Newbery Honor Book. Levine's other books include Ever, a New York Times bestseller; Fairest, a Best Book of the Year for Publishers Weekly and School Library Journal, and a New York Times bestseller; Dave at Night, an ALA Notable Book and Best Book for Young Adults; The Wish; The Two Princesses of Bamarre; A Tale of Two Castles; and the six Princess Tales books. She is also the author of the nonfiction books Writing Magic: Creating Stories That Fly and Writer to Writer: From Think to Ink, as well as the picture books Betsy Who Cried Wolf and Betsy Red Hoodie. Gail Carson Levine and her husband, David, live in a two-centuries-old farmhouse in the Hudson Valley of New York State.

"This hand-sized volume features delicate black-and-white line drawings that are very much in keeping with the tone of many fairy tales, but those familiar with Levine's" Ella Enchanted" will wisely expect, and be gratified by, the sly and unexpected foolery of this story and its companion, " The Princess Test." In" The Fairy's Mistake, " Ethelinda is horrified to discover that her fairy blessing on the kind Rosella, that jewels fall from her mouth when she speaks, is being exploited by her greedy new husband, Prince Harold. Her curse on Rosella's sister, Myrtle, who drops slimy and creepy things from her mouth when she speaks, is also going awry; Myrtle uses this to get whatever she wants from people." The Princess Test" takes on Lorelei's ability to feel a pea under 20 mattresses: this young thing is a great trial to her family as she is allergic to, or injures herself with, almost every household item she touches. Genuinely delightful and funny, both tales are set in the village of Snettering-on-Snoakes in the Kingdom of Biddle, a place readers will want to visit again."--" Kirkus Reviews""The author of Ella Enchanted revisits similar territory in these first two installments of "The Princess Tales" series. Extended spoofs of the Grimms' ""Toads and Diamonds"" and Andersen's ""The Princess and the Pea, "" the stories feature characters with names such as Humphrey, Sam, Leonard, and Ethelinda. The action and dialogue, likewise, are down-to-earth and dryly humorous. In the first tale, a fairy rewards and punishes two sisters' respective kindness and greed, but both plans backfire wildly: Rosella ends up unhappily engaged to a prince who only has eyes for the jewels that spill fromher mouth, while people give Myrtle whatever her heart desires, so long as she keeps her mouth shut and her insects and reptiles to herself. All eventually works out, but the jokes wear thin by the end. The humor is more varied and original in the second story, in which a prince falls for a blacksmith's kind daughter but despairs of her ever passing his parents' "princess tests." He doesn't know it, but the girl's a shoo-in; Lorelei has the fragile constitution of a princess, and with her polite fastidiousness and excessive sensitivity toward food, clothing, and surroundings she easily crushes the competition-seventy-nine real princesses. Static and unnecessary illustrations accompany the stories, which are printed in an ornate, difficult-to-read typeface. Nowhere near as enchanting as Ella, but fans of funny fairy tales will have some laughs." -- "Horn Book"