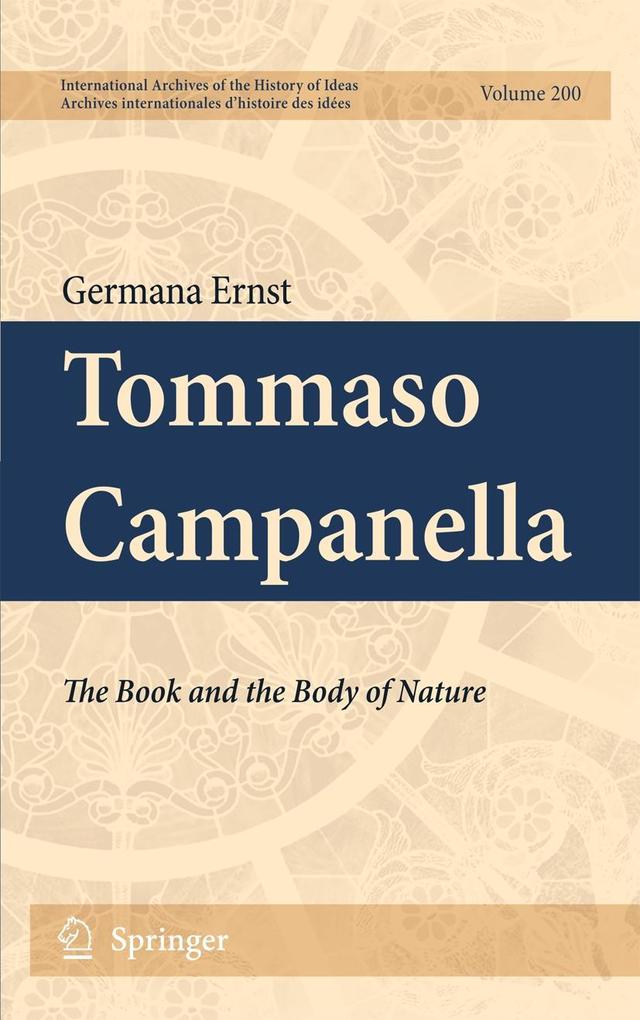 von Germana Ernst
The Book and the Body of Nature. Originaltitel: Tommaso Campanella. Il libro e il corpo della natura. Sprache:…
Buch (gebunden)
A friend of Galileo and author of the renowned utopia The City of the Sun, Tommaso Campanella is one of the most thinkers of the early modern period. Here is a comprehensive intellectual biography of this important and complex philosopher of the Rena … weiterlesen
Dieser Artikel ist auch verfügbar als:
Geschenk per Mail versenden
Buch (gebunden)

A friend of Galileo and author of the renowned utopia The City of the Sun, Tommaso Campanella (Stilo, Calabria,1568- Paris, 1639) is one of the most significant and original thinkers of the early modern period. His philosophical project centred upon the idea of reconciling Renaissance philosophy with a radical reform of science and society. He produced a complex and articulate synthesis of all fields of knowledge - including magic and astrology. During his early formative years as a Dominican friar, he manifested a restless impatience towards Aristotelian philosophy and its followers. As a reaction, he enthusiastically embraced Bernardino Telesio's view that knowledge could only be acquired through the observation of things themselves, investigated through the senses and based on a correct understanding of the link between words and objects. Campanella's new natural philosophy rested on the principle that the books written by men needed to be compared with God's infinite book of nature, allowing them to correct the mistakes scattered throughout the human 'copies' which were always imperfect, partial and liable to revisions. It is in the light of these principles that he defended Galileo's right to read the book of nature while denouncing the mistake of those - be they Aristotelian philosophers or theologians - who wanted to stop him from carrying on his natural investigations. However, Campanella maintained that the book of nature, far from being written in mathematical characters, was a living organism in which each natural being was endowed with life and a degree of sensibility that was appropriate for its preservation and propagation. Nature as a whole was an organism in which each single part was directed towards the common good. This is the reason why Campanella thought that nature had to be regarded as an ideal model for any political organisation. Political structures were often ruled by injustice and violence precisely because they had departed from that natural model. This book charts Campanella's intellectual life by showing the origin, development and persistence of some of the fundamental tenets of his thought.

I. The Book of Nature. 1. «I was seduced by Telesio» 2. Philosophy Demonstrated through the Senses. 3. From Naples to Padua. Encounters, Conflicts, Trials. II. From the Palace of Atlas to the Way Back. Dogma and Politics. The Dialogo contro Luterani. 2. The Italian Poetica. 3. Natural Philosophy in the Epilogo magno. 4. Natural ethics. . Machiavellianism and Universal Monarchy: the Monarchia di Spagna. III. The Conspiracy. 1. The Utopia of Liberty. 2. The Trials. Heresy, Rebellion, Prophecy. 3. The Prophet and his Destiny. Madness, Reason, and Dissimulation. 4. 'Articuli prophetales' 5. Political Bonds: the Aforismi politici. 6. Body of the Republic: the Città del sole. IV. In the Cave of Polyphemus. 1 The Poesie. 2. Sense, spiritus, natural magic. 3. Religion and Nature: the Atheismo trionfato. 4. The New Metaphysics. V. Christian Unity. 1. Campanella and Venice. 2. Papal Primacy: the Monarchia del Messia. 3. Modes and Structures of Ecclesiastic Government. 4. Christianity as Universal Religion. The Quod reminiscentur. 5. Theologicorum libri. VI. The Reform of Knowledge and the Composition of the Encyclopedia. . Science and faith. The Apologia pro Galileo. 2. Philosophy and Theology. 3. Astrology. 4. Celestial Signs: the Discorso sulla cometa. 5. The Medicina. 6. Philosophia realis. 7. Philosophia rationalis. VII. The Disappointment of Liberty. 1. Politicians, Courtiers and the Prophet's Fate. 2. The Astrological Affair concerning the Horoscope of Urban VIII. 3. Events and the Roman Writings. 4. French Friendships. From the Fall of la Rochelle to the Departure for France. VIII. The Paris Years. 1. The Arrival in France and the Stay in Paris. 2. From theDecline of Spain to French Hegemony. 3. The Edition of the Opere and the Last Writings. Abbreviations. Index.

Germana Ernst is professor of History of Renaissance Philosophy at the Third University of Rome. She studied at the University of Milan, graduating with a thesis on Campanella's Apologia pro Galileo. She has written papers on early modern authors, such as Girolamo Cardano, Giordano Bruno, Giovanni Battista Della Porta, Giulio Cesare Vanini, and Galileo Galilei. Her main research activities, however, have been focused on Tommaso Campanella, on whom she has written three books together with many essays and articles dealing with ethics and politics, philosophy of nature, religion, natural magic, prophecy and astrology. She edited many published and unpublished works of Campanella, including Articuli prophetales (1977), Città del sole (Milano 1996), Monarchia di Spagna (Paris 1997), a collection of Lettere (Pisa-Roma 2000), and Opuscoli astrologici (Milano 2003). She has also managed to retrieve a number of texts that had been considered lost, including shorts works, letters and five political sonnets. Her most important discovery remains the autograph manuscript in Italian of Ateismo trionfato (2 vols., Pisa 2004), a text that inaugurated a project dedicated to the publication of a significant selection of Campanella's works by the publishers of the Scuola Normale Superiore of Pisa. Recently, Ernst published Campanella's intellectual autobiography, De libris propriis et recta ratione studendi syntagma, together with an Italian translation (Pisa-Roma 2007) as well as a new annotated edition of Campanella's main work in the field of natural philosophy, Del senso delle cose e della magia (Roma 2007). The publication of a new comprehensive edition of Campanella's epistolary corpus, Lettere, is expected in 2009.

In 1995, together with Eugenio Canone (Lessico Intellettuale Europeo, CNR, Rome), Ernst founded Bruniana & Campanelliana, a journal dedicated to representatives of Renaissance philosophy and their times. From the 1980s onwards she participated in numerous international conferences and published many articles and reviews in international journals.

Buch (gebunden)
Evidence in the Age of the New Sciences