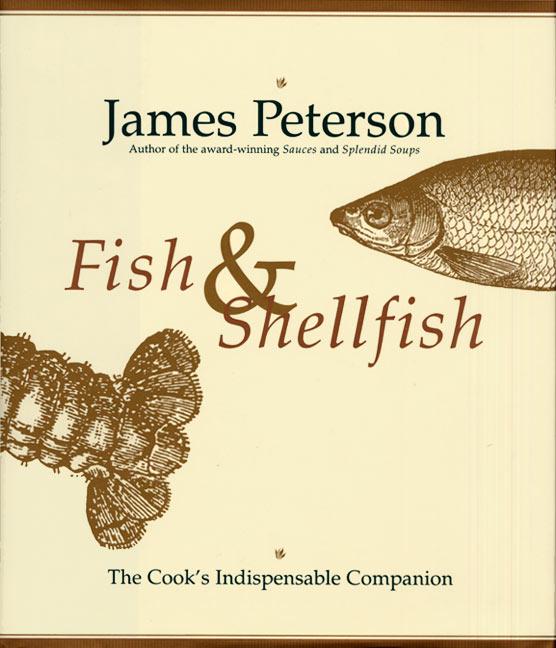 15% Rabatt10 sichern mit Gutscheincode: BOOK15
​
Every few decades a chef or a teacher writes a cookbook that is so comprehensive and offers such depth of subject matter and cooking inspiration that it becomes a virtual bible for amateur and professional alike. Author James Peterson, who wrote the … weiterlesen
Geschenk per Mail versenden
Buch (gebunden)

Every few decades a chef or a teacher writes a cookbook that is so comprehensive and offers such depth of subject matter and cooking inspiration that it becomes a virtual bible for amateur and professional alike. Author James Peterson, who wrote the book Sauces, a James Beard Cookbook of the Year winner, and the incomparable Splendid Soups, once again demonstrates his connoisseurship with Fish & Shellfish, a monumental cookbook that will take its rightful place as the first and last word on seafood preparation and cooking.
Fish & Shellfish demonstrates every conceivable method for preparing sumptuous meals of fish and shellfish, from baking, braising, deep-frying, grilling and broiling to poaching, panfrying, marinating, curing and smoking, steaming, and microwaving. Whether your taste runs strictly to shellfish or to everything seafood, Fish & Shellfish offers the equivalent of a complete cookbook on each subject. Within the chapters on finfish you'll learn how to prepare enticing recipes remarkable for their ease of preparation, their versatility, and their originality Here Peterson offers such splendid flavors and textures as succulent Stuffed Striped Bass with Spinach, Shrimp, and Mushrooms; crunchy Halibut Fillets with Curry, Herbs, and Almond Crust; delicate Salmon Fillets A la Nage with Julienned Vegetables; savory Braised Tuna with Vegetables; and fiery Thai-Style Swordfish Satay.
If it's shellfish you prefer, there are pages and pages of recipes for baking, frying, steaming, or serving raw everything in a shell, including mussels, clams, oysters, scallops, lobster, shrimp, crab, and crayfish. Peterson explains how to judge freshness and how to prepare shellfish delights, including lemony-flavored Steamed Mussels with Thai Green Curry; aromatic Littleneck Clams in Black BeanScented Broth; a simple and comforting Linguine with Clam Sauce; elegant Hot Oysters with Leeks and White Wine Sauce; rich and savory Braised Scallops with Tomatoes and Fresh Basil; Steamed Lobster with Coconut Milk and Thai Spices; Shrimp with Tomato Sauce, Saffron Aioli, and Pesto; hit-the-spot Sautéed Crab Cakes; and Japanese Style Grilled Squid, to name but a few of the brilliant and vast array of wonderful seafood selections.Fish & Shellfishalso offers techniques for preparing raw, marinated, cured, and smoked fish.
As you exploreFish & Shellfish, you'll learn not only the essentials of seafood preparation but everything in between, including how to make a curry sauce, which red wines to cook with, how to fry parsley, and how to make Vietnamese dipping sauces. You'll learn the secrets of a variety of coatings, how to blacken fish, add stuffings, and deglaze the pan for sauces, as well as discover the delights of salsas, chutneys, relishes, mayonnaises, and butters.
Here is seafood in every incarnation, from soups, stews, and pastas to mousses, soufflés, and salads. Try everything from pureed Marseilles-Style Fish Soup and Moroccan Swordfish Tagine with Olives and Saffron to Homemade Cuttlefish-Ink Linguine, and Crayfish Stew with Tomatoes, Sorrel, and Vegetables.
Jim Peterson has traveled the world and brought back the best international seafood flavors, textures, and techniques. Now you can improvise on your own with Thai marinades, Indian spices and condiments, and Japanese grilling methods, all of which play off more familiar ingredients to produce memorable dishes.
At the end of Fish & Shellfish you'll find a complete Finfish Dictionary, where you'll learn all you need to know about more than sixty species of saltwater and freshwater fish. There's also a 32-page section of color photographs that pictures many of the mouthwatering recipes in the book. And the step-by-step pictorials in the color section will show you how to prepare fish and shellfish for cooking.
James Peterson's books have been hailed as the most companionable and dependable of cooking guides. Replete with tables, timing charts, advice about equipment, safety preparations, a glossary of foreign ingredients, and an exhaustive index, Fish & Shellfish will give you the power of flexibility and spontaneity as it transforms you into an accomplished seafood cook. Here is a fundamental cookbook that you will come to depend on every time you think seafood-and now you'll be thinking seafood all the time.