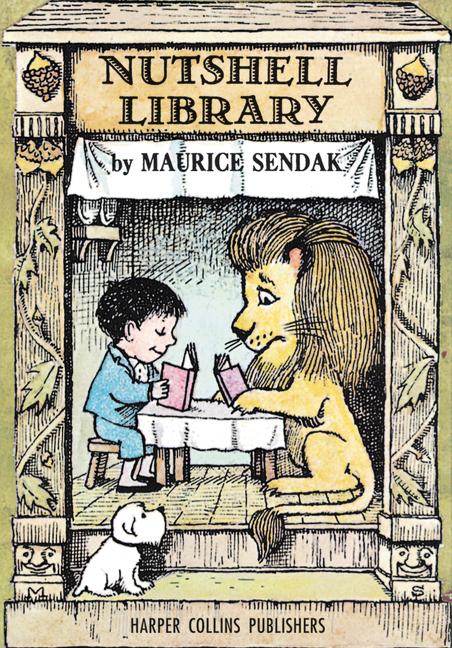 From Maurice Sendak, the Caldecott Medal-winning genius who created Where the Wild Things Are, comes Nutshell Library, which will enchant readers with four classic titles.

Containing pocket-size versions of perennial favorites Alligators All Around, Chicken Soup with Rice, One Was Johnny, and Pierre, this pint-size library is perfect for small hands.

Learn the alphabet with silly alligators, drink chicken soup with rice every month, count visitors with a boy named Johnny, and survive a scare with a boy who doesn't care. Endless adventures await in these lyrical stories that children, and their grown-up readers, will love reading and sharing over and over again.

A wonderful stocking stuffer or baby shower gift, Maurice Sendak's Nutshell Library will evoke powerful memories for many, and the rhymes and stories continue to speak to new generations of little ones.

And if you prefer your Nutshell Library books on their own and not quite so tiny, each is also now available in a board book edition.

Maurice Sendak's children's books have sold over 30 million copies and have been translated into more than 40 languages. He received the 1964 Caldecott Medal for Where the Wild Things Are and is the creator of such classics as In the Night Kitchen, Outside Over There, Higglety Pigglety Pop!, and Nutshell Library. In 1970 he received the international Hans Christian Andersen Medal for Illustration, in 1983 he received the Laura Ingalls Wilder Award from the American Library Association, and in 1996 he received a National Medal of Arts in recognition of his contribution to the arts in America. In 2003, Sendak received the first Astrid Lindgren Memorial Award, an annual international prize for children's literature established by the Swedish government.