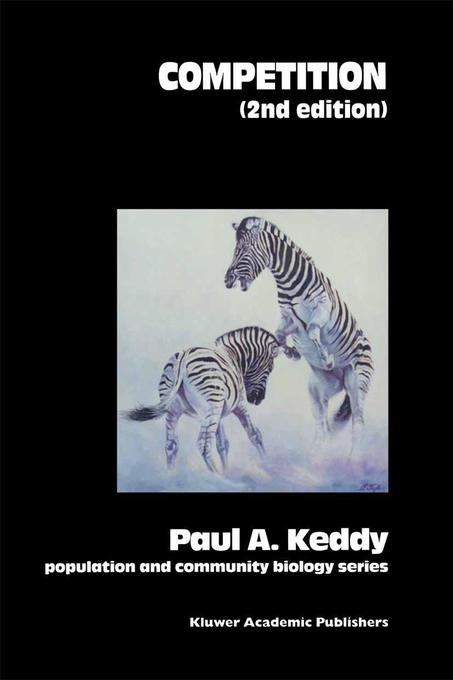 Competition is one of the most important factors controlling the distribution and abundance of living creatures. Sperm cells racing up reproductive tracts, beetle larvae battling inside single seeds, birds defending territories, and trees interfering with the light available to neighbours, are all engaged in competition for limited resources. Along with predation and mutualism, competition is one of the three major biological forces that assemble living communities. Recent experimental work, much of it only from the last few decades, has enhanced human knowledge of the prevalence of competition in nature. There are acacia trees that use ants to damage vines, beetles that compete in arenas for access to dung balls, tadpoles that apparently poison their neighbours, birds that smash the eggs of potential competitors, and plants that associate with fungi in order to increase access to soil resources. While intended as an up-to-date reference work on the state of this branch of ecology, the many non-technical examples will make interesting reading for those with a general interest in nature.

Greatly expanded from the first prize-winning edition, there are entirely new chapters, including one on resources and another on competition gradients in nature. The author freely ranges across all major taxonomic groups in search of evidence. The question of whether competition occurs is no longer useful, the author maintains; rather the challenge is to determine when and where each kind of competition is important in natural systems. For this reason, variants of competition such as intensity, asymmetry and hierarchies are singled out for particular attention. The book concludes with the difficulties of finding general principles in complex ecological communities, and illustrates the limitations on knowledge that arise out of the biased conduct of scientists themselves.

Competition can be found elsewhere in living systems other than ecological communities, at sub-microscopic scales in the interactions of enzymes and neural pathways, and over large geographic areas in the spread of human populations and contrasting ideas about the world. Human societies are therefore also examined for evidence of the kinds of competition found among other living organisms. Using an array of historical examples, including Biblical conflicts, the use of noblemen's sons in the Crusades, the Viking raids in Europe, strategic bombing campaigns in the Second World War, and ethnic battles of the Balkans, the book illustrates how most of the aspects of competition illustrated with plants and animals can be extended to the interactions of human beings and their societies.

"Competition (2nd Edition) by Keddy provides an overview of past and current work on competition, and suggests promising directions for future research. The book includes many elements that should help accelerate the rate at which knowledge is gained in the field. It encourages the consideration of taxonomic groups belonging to all kingdoms, not only the study of charismatic mammal and bird species. Accordingly, Keddy provides examples of competition in a wide array of species, including interesting examples suggesting that today's human societies have been largely shaped by competitive interactions. Competition (2nd Edition) is more than a literature review; the book also highlights exciting new research areas, and suggests how to empirically approach these deserving themes. It constitutes an important contribution to the field by providing the means to enhance the value of future competition studies. Ecologists should benefit from reading the book because it provides tools to maximize the rate of knowledge acquisition per unit of research effort." (Daniel Fortin, Department of Biological Sciences, University of Alberta, Edmonton, Canada Ecoscience, 10:3 (2003)
"This expanded and revised edition of Paul Keddy's well known book on competition includes many recent examples and new written chapters on competition gradients, competitive hierachies and resoureces with extended discussion of models and of evolutionary aspects of the subject. It contains examples to help explain the theories being discussed and there are numerous line drawings." (Review Editor Bulletin of the British Ecological Society, August 2003, 34:3)